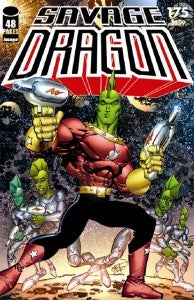 Independent comic books tend to come and go. Most unfortunately go quickly without ever reaching double digit much less triple digit issue numbers. Erik Larsen’s Savage Dragon is one of the rare exceptions, as it just keeps going and going. Savage Dragon will soon be celebrating its 175th issue putting it in rare company in regards to longevity in creator owned titles.

Savage Dragon #175 is due to be released by Image Comics on August 31, 2011. The issue will be a special 48-page anniversary issue, which will be written, penciled and inked by Erik Larsen. There will also be a Vanguard back-up story by Gary Carlson and artist Frank Fosco.

Savage Dragon has actually been killed three times in the past 30 issues of his comic, so the 175th issue will address if the green-skinned, fin-headed freak that awakes to find himself rocketing through space is actually the real deal.

"I've really run Dragon through the ringer over the last few years," said Erik Larsen. "Even though he'd essentially been killed by a mind-and-body-snatching monster called Virus back in issue #147 and then again by Overlord in #150, when it came to wrapping up the 'Emperor Dragon' saga, it became pretty clear that even with all the body-switching shenanigans, things couldn't just go back to the way they were. I knew he had to die... but what then? After focusing on Dragon's son Malcolm for several issues, Savage Dragon #175 answers that question. Definitively, I hope!"

According to Image Comics, Savage Dragon #175 will focus both on Malcolm Dragon as he faces the nigh-omnipotent Overlord and on someone who looks like his dead father on a spaceship headed for parts unknown. Whoever this mystery person turns out to be, don’t look for the Savage Dragon series to end anytime soon, because Image says Savage Dragon #175 will set the stage for the next several years' worth of Dragon tales.

"There are some who confuse what Erik's doing on Savage Dragon with standard rock 'em, sock 'em superhero stuff, but like Mark Millar's Kick-Ass and Robert Kirkman's Invincible, this is a series that constantly pushes the boundaries," said Image Comics Publisher Eric Stephenson. "Very few superhero comics are as uncompromising or as propelled by change as Savage Dragon, and nearly 20 years after it first began, it's still one of my favorite superhero comics ever."