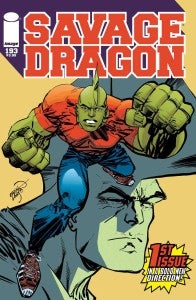 Malcolm Dragon is front and center on a pair of covers revealed today via Erik Larsen's Facebook page teasing a "bold new direction" for Savage Dragon beginning with November's #193. The image at left is the cover as solicited, and features Malcolm's father (and the series' titular Dragon, although nobody calls him the Savage Dragon on the page); below, you can see an alternate cover by Larsen and fellow Image Comics co-founder Todd McFarlane which is all Malcolm. The cover to Savage Dragon #192 featured Dragon being led to the electric chair. Also pictured: The new logo that Larsen has been working on (he's shared it in its various stages of development on social media), in action on the cover. The new logo coupled with a new lead character helps to convey a sense of all-around change for the long-running, creator-owned title. 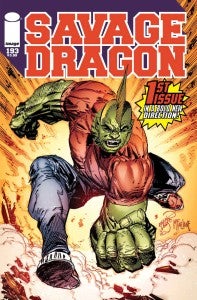 "So, plans are to make some rather sweeping changes in Savage Dragon so that issue #193 can be something of a new beginning," Larsen said in May. "There's something someone somewhat magical to me about the number 193 – it was the issue where Jack Kirby returned to Captain America, which was the first time I was able to buy new Jack Kirby Captain America comics off the stand. Issue #193 was also the issue where my favorite Hulk artist Herb Trimpe concluded his rather lengthy run on The Incredible Hulk. So, I'm looking forward to Savage Dragon #193 and my new beginning." Malcolm and his sister Angel have been the nominal leads since Dragon was apparently killed back in 2009's Savage Dragon #150, but after surviving that story, Dragon has been a key part of the book ever since. In-story, he's currently on death row after killing huge numbers of people while under the influence of another personality.