The J.M. DeMatteis/Mike Cavallaro IDW miniseries The Life and Times of Savior 28, loosely derived from a 1980s Captain America story that Marvel wouldn't let DeMatteis tell, is one of the great, under-read "super soldier" stories of all time.

I talked to DeMatteis about the story some time ago, and thought that it was worth republishing some of those comments here as a companion to our Memorial Day piece on other great comic book soldiers.

UPDATE: For clarity's sake, let me say that back when I discussed the book with DeMatteis, it was a new miniseries; that was, I believe, late 2009 and the story is now available in trade paperback. It's my opinion (stated repeatedly elsewhere, and quoted on the cover of the trade) that The Life and Times of Savior 28 is one of the greatest superhero stories of the last 20 years.

Where did this story come from? You told me at the New York Comic Con that it was something you’d been mulling over since your days with Captain America, which means that it would predate things like The Golden Age and Watchmen and, if published back then, might have been truly unique among its peers.

Back in those ancient days of the early 1980’s—I think it was ‘83—I was finishing up a year-long storyline that culminated in the death of the Red Skull.  I began to question where Captain America would go from there.  What would this man, who’d been waging war, punching faces, dropping buildings on the bad guys’ heads, for (at that time) forty years, do once his primary opponent, a guy he’d been battling since l940, was gone.  Knowing Cap—well, my interpretation of Cap—it seemed logical to me that he would have reached a point where he said, “Enough!  I’ve been doing this for four decades and it hasn’t made the world a better place or me a better man.  Violence is a dead end and I have to chart a new course.”  This would also allow me, as a writer, to deal with my ambivalence about the role of violence in super-hero comics, something I’ve always been extremely uncomfortable with.  Don’t get me wrong, I love these characters—they resonate on so many wonderful, mythic levels—but most super-hero stories come down to two guys in costumes beating the crap out of each other.  Not exactly the most enlightened point-of-view there is.  In fact, it’s a fairly stupid and destructive one.

I worked up a proposal for a pretty massive arc that would find Cap becoming a global peace activist.  (Which would freak out both the government and his fellow super-heroes.)  It all culminated in Cap’s assassination at the hands of Jack Monroe, the Bucky of the 1950’s.  Now this was a fairly radical idea for its day—but my editor, the late, great Mark Gruenwald, liked it and was willing to go out on a limb with me.  Jim Shooter, on the other hand, was totally against it.  (As editor-in-chief of the Marvel Universe, and custodian of those characters, he had every right to feel that way.  And, looking back, I can understand why a story that questions every super-hero’s reason for being wouldn’t work within the context of that shared universe.)  So the idea went down in flames…and I’ve been playing with it—peeling it apart, putting it back together—ever since.  Trying to find just the right vehicle for the idea. 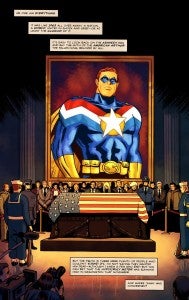 One thing that really struck me in terms of characterization is the Disciple’s cursing in the narration. It completely fits the aging veterans I’ve known in my life, while obviously being out-of-character not just for heroes of that time, but for how they’re depicted ages on (look at Justice Society of America, for example, and tell me if you think DC will ever let any of those guys curse).

One of the most important parts of writing for me is finding the right narrative voice to tell the story.  Is it one of the characters?  An omniscient narrator?  What’s the tone of the narration?  What’s the point-of-view?  Do we even need a narrative voice at all or can we tell the story through visuals and dialogue alone?  In the case of Savior 28, Dennis McNulty’s voice eventually filtered through the noise.  Once I found it, I just locked on and let him talk. There was no conscious decision to make him speak a certain way, to use profanity or not, to hold any particular political or philosophical viewpoints.  It’s just McNulty’s voice leading me on.  He’s very real to me.

I feel like the binge is kind of an elegant, if tragic, answer to the eight-year-old question of “What were the superheroes doing on 9/11?”. Were those just two scenes that had already been written and needed to be married, or how did that materialize?

It really just happened as a natural outgrowth of following the story.  I was dealing with a story that moves from the 40’s to the present day, that deals with the social and political realities of the times:  How could I not deal with one of the greatest tragedies in American history?  Especially when my main character is an American icon?  But it had to be personal.  The larger tragedy of 9/11 is a reflection of several other tragedies in 28’s life…and they all come together to totally demolish him, to topple his world-view, everything he’s fought for, believed in, for the previous sixty years.

Once you give up the naivete of black-and-white morality, what’s easier to write? Is it harder to slip back into “forties Savior 28” once you know (and presumably support) where he’ll end up?

As we’ll see in the second issue—which takes 28 face-to-face with one of the greatest horrors of World War II—Savior 28 wasn’t quite as innocent as he pretended to be.  The world has never been black and white, even when—especially when—we’ve tried to project a black and white morality over it.   That said, it’s fun to play with the various eras of super-hero traditions and American history.  The truth is, this could have easily been a twelve issue series.  There are so many areas of pop culture, politics and history I wanted to explore.  I’m constantly writing sequences then cutting them out because there’s just no room for them.

Where did you get that idea? The “traitor” taunts and all that? Was it always part of the S28 idea or did it develop post-9/11 or something?

The idea that people would turn against our hero was there from the start. That said, the post-9/11 period (when many who dared to criticize our government or oppose the Iraq War were branded appeasers, and sometimes traitors…when most anti-war protests were ignored, or substantially downplayed, by the media…when the ludicrous concept of “free speech zones” was popularized) became the perfect background for Savior 28’s journey.  The ideas I had in my original proposal were playing out on the news every night.

How peeved were you when, during the writing of this probably, Bucky came back and Captain America got capped in a fairly similar fashion to what we see in the first issue?

I wasn’t peeved at all.  In fact it was a weird kind of vindication:  “See?  I wanted to do this in l983!”  That said, I haven’t actually read any of those Captain America issues and I’m glad I didn’t, because I wouldn’t want any of that to, however unconsciously, bleed into Savior 28.

Savior 28: One of Comics' Great Patriots