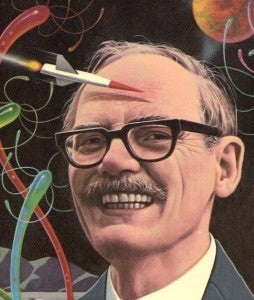 Frederik Pohl, the author and editor often credited as changing the face of modern science fiction, passed away today, according to a tweet from his granddaughter, author Emily Pohl-Weary. Pohl, the author of The Space Merchants, wrote dozens of books including Jem and The Space Merchants. His work inspired the later works of writers like Philip K. Dick, with The Space Merchants in particular serving a social commentary cloaked in a science fiction tale about a dystopian, corporate-controlled future. He also, as an editor, helped to discover and promote writers like Samuel Delany and Joanna Russ. "You can't really predict the future. All you can do is invent it," Pohl told Vice. "You can do things that may have an effect on what the future will be, but you can't say which is going to happen unless you know who's inventing things and who's making things happen. We would not have landed a man on the moon in 1969 if John Kennedy hadn't decided to do it. It's because he invented that event that it took place. It probably would've happened sooner or later under some other circumstances, but that's why it happened. Same with atomic energy. So you can see how future events take place but what you can't do is know who's going to do something that will change it. You can't really say what's going to happen, but you can show a spectrum of possibilities."