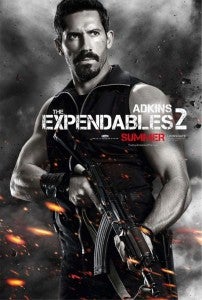 Up until the time that Warner Bros. officially announces which actor will be playing Batman in Batman Vs. Superman there will likely be a least one new actor tied to the Batman role every week. While some of the Batman rumors come from blogs and anonymous sources, other Batman rumors come directly from an actor's Twitter account.

Earlier today, the official Twitter account for Scott Adkins tweeted, "Some BIG news fans!! Warner Brothers have approached Scott Adkins to audition to be the new BATMAN & he has..." The tweet has since been removed, which isn't surprising because actors often reveal things on Twitter that studios later ask them to take down.

Scott Adkins is 37 years old, and Warner Bros. is reportedly looking for an actor in their late thirties or early forties to play an older Batman in Batman Vs. Superman. Scott Adkins is a martial artist, so he definitely has the build and the fight expertise to play a convincing Batman. Movies that Scott Adkins has appeared in include The Expendables 2, Undisputed II: Last Man Standing, and Undisputed 3: Redemption.