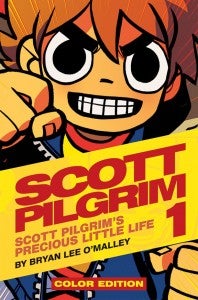 Brian Lee O'Malley told an audience at the Emerald City Comic Con yesterday that his best-selling Scott Pilgrim series of graphic novels--originally published as manga-digest-sized paperbacks--will be released as larger-format hardcovers, once every six months or so, starting this year. The colors will be provided by Nathan Fairbairn, who is currently working on Swamp Thing and Batman Incorporated for DC.

According to Comics Alliance, from whom we have liberated the image at left (thanks, guys!), the paperback digests--one of the best-selling comics in the bookstore market, and books which appear consistently on Diamond's graphic novel bestsellers, will be discontinued to make way for the new product. According to the site, the new books will measure 6" by 9", and the first volume will hit stores in August of this year, followed by the second in October before settling into a more regular twice-annually schedule.

The Scott Pilgrim Vs. the World feature film, which loosely adapted all six of the books, was obviously in color at the time of its release, and while it's rare for black and white comics to be colorized later for the collected edition, it's not unheard-of. Jeff Smith's Bone comics were collected into trade paperbacks and, later, into colorized version of those trade paperbacks which have done very well in the children's book market. Smith recently reissued the popular one-volume edition as a colorized hardcover, which sells for $150.

An omnibus in Pilgrim's future, maybe?

Scott Pilgrim to Be Reissued as Color Hardcovers