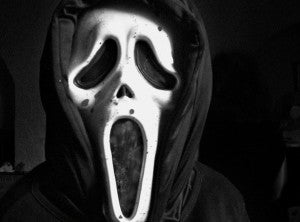 MTV may have been preoccupied with their Movie Awards presentation and never-before-seen footage from The Dark Knight Returns last night, but this morning, TV Line says they're hearing that the cable network is developing a television series based on the popular slasher-comedy franchise Scream.

Centering around a killer known as Ghostface (actually a series of characters assuming the identity as the series progresses, the series would likely recast the role of Sidney Prescott (played in the films by Party of Five's Neve Campbell) and start fairly fresh, avoiding the history and continuity that's been built up over the course of the existing movies. It's unclear what role, if any, the creators of the original films would play in the series.

Created by Dawson's Creek's Kevin Williamson with horror legend Wes Craven, the first film began as an examination of horror films, as seen from the inside of one, and set out a series of rules that characters needed to abide by in order to live through the film. Over the course of more than fifteen years, fans have gone out to see four Scream movies, bringing the series to a total worldwide box office in excess of $600 million. While the first two films--and particularly the first one--got good reviews (at least for that kind of movie), the third and fourth installments have been met with both critical and box office indifference.

MTV has recently taken more chances on scripted programming in spite of their spotty record with it in the past and the popularity of their reality programming. In addition to new episodes of the network's fan-favorite Beavis & Butt-Head which began last year, MTV also recently drew strong reviews and ratings success with things like Awkward and Teen Wolf.

Scream TV Series In the Works at MTV

Walmart Reveals When Its Next PS5 Restock Is Going Live