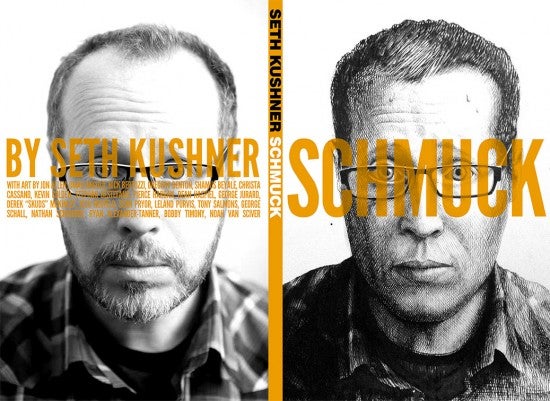 Schmuck is a 168-page trade paperback about one man’s awkward coming-of-age-quest to find love in New York City, written by Kushner with design by Eric Skillman, a forward by Bored to Death creator Jonathan Ames and art by 22 great cartoonists.

The story follows a character struggling to find love after a long-term relationship ends badly. With Kushner writing and a litany of talented indie comics artists drawing the strips, he explored, exploited and exaggerated his own foibles for comic and dramatic vlue.

Kushner joined ComicBook.com to talk about the project, which is currently about half-funded with about half its time remaining. You can see the Kickstarter video for Scmuck below and click on the link above for more information.

ComicBook.com: It's interesting to me that the project started as a prose autobiography. What pushed it into comics?

Seth Kushner: Comics were always my first love and because I so revered the creators behind the comics, I never thought I could actually make a comic myself. In 2008, I was working on the project that would become the book, Leaping Tall Buildings: The Origins of American Comics (co-authored with Chris Irving, 2012 powerHouse Books) and I was getting to spend time with so many of my comics heroes, and being in that world, (as an outsider and documenter at first) made me think maybe I could do this too. Maybe I could create my own comic.

Some of my new comics friends encouraged me to try, and Dean Haspiel stepped up as a mentor to me. He became my comic book creator Yoda. “Use less panels per page, you should.”

Once I learned how to format a comics script, and started writing and adapting my prose for comics, it just felt right. The main character of Schmuck, Adam Kessler, is based upon me and he’s obsessed with comics and they play into several parts of the story, so it made sense for the story to be told as a comic. 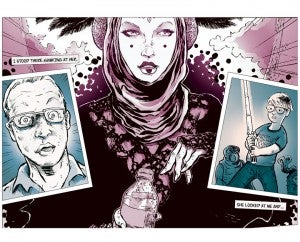 ComicBook.com: Was Schmuck always written with an eventual print edition in mind, or did that come up after the webcomic developed a following?

Kushner: I always planned a print edition as my Schmuck endgame. You’re right, I did the webcomic version to develop a following, because the web is great for that. As much as a appreciate digital, and I do read plenty of comics digitally, for me, it’s not “real” until there’s a book. I’m a bit of a print fetishist, like many comics readers, and I just love having a corporeal object.

ComicBook.com: Autobiographical comics have often trended toward self-depreciation, and your title is pretty obviously pointing people in that direction. Why do you think that works so well in this medium?

Kushner: I think the self-deprecation in autobio comics comes from the fact that they’re made by people who love comics, and as we all know, traditionally, these are not the jocks or the cool kids. It might be different now because of all the comic-based movies and games, but when I was a kid, we comics lovers were the geeky outcasts, so hence the self-deprecation.

For Schmuck, I gave a lot of thought to how I would portray myself through Adam. I was strict with myself to never allow him to be “too cool” because, well, I never was. I wanted an honest portrayal and self-deprecation has always been my “style.”

ComicBook.com: Did fictionalizing the character names allow you to do and say more or less whatever you wanted to without worrying about somebody being hurt or threatening to sue you into oblivion?

Kushner: It was never the fear of litigation that precipitated my “fictionalizing” (though you bring up a good point) the characters. Once I decided to change the names of all the players in the story, it freed me to think of them as “characters” and then my writing got much better. I think story comes before factual truth, so while everything in Schmuck is based upon reality, the characters and events are more “emotionally true” than factually. 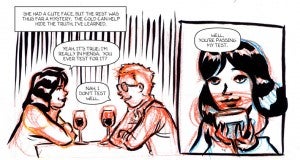 ComicBook.com: Obviously, there's a difference between working with multiple artists on a webcomic versus in a single collected work. How do you think it all holds together as a unit?

Kushner: The book will be a different animal from the online version. Schmuck was beta tested on TripCity.net, where it ran as bit-sized “schmucky shorts”, mostly in black & white. The book will feature re-mastered versions of the comics, many of which have been colored or toned and re-edited into a linear narrative to give readers the whole schmucky story in one place. Additionally, the book will feature exclusive stories that have not appeared online by such artists as: Dean Haspiel, Josh Neufeld, Gregory Benton, Tony Salmons, James Smith and Tim Ogline. They’re some of the strongest (and the schmuckiest) stories in my opinion.

The book itself will be a beautiful package. Eric Skillman, who does the stunning Criterion Collection DVD packages, is designing it. He also designed my book, Leaping Tall Buildings and he won an Eisner for designing Tales of Sand. He’s already conceived of an excellent cover for Schmuck with art by Joseph Remnant, who drew Harvey Pekar’s Cleveland.

ComicBook.com: Writing something for an artist, did you have an opportunity to play to that artist's particular strengths?

Kushner: I did my best to match up the right artist with the right story, but I also learned along the way to write for an artist’s strengths. For example, I had a story called “The One” which chronicles the minutia of Adam’s relationship with a particular young woman as he tries to figure out where he stands with her. I originally had a short dream sequence based upon The Matrix, but when I saw how well my artist, Shamus Beyale draws action, I expanded the dream to multiple pages and also added two fantasy fight sequences to the narrative.

I believe adjusting the script to play to an artist’s strength is key to making a comic shine. It’s something I’ve done on all my post-Schmuck projects.