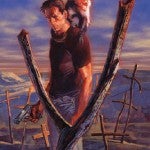 Recently, Shia LeBoeuf said he wasn't very interested in playing the lead character in the comic book adaptation of "Y: The Last Man." It appears things have changed.

Collider spoke with the 'Transformers 2' star about whether or not he'd want to do the project:

"Absolutely, man! In fact, that's what's going on right now. Vaughn and Ellsworth and DJ are writing the script right now. The script is not ready to be shot. DJ is making a different movie right now. He's making "Jack and the Beanstalk". There's just other things going on with DJ and I wouldn't want to make the movie with anybody else because he loves it like I do. But I don't think Vaughn is trying to give it to anybody else. I think that it is something that's very realistic, it's just not in the pipe for the next year."

Sounds promising. 'Y: The Last Man' could be great on the big screen.