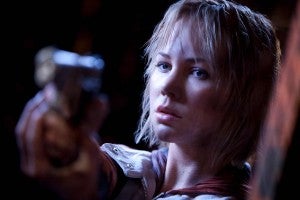 The original survive the horror game series Silent Hill is once again making waves for its unique brand of terror and suspense is back once again with a new film and a new game installment.  At this year’s Comic-Con, there were a couple of major pieces featured.  One was the panel scheduled later in the day on Saturday for Silent Hill: Revelation 3D, the latest film in the series, with the next game, Silent Hill Book of Memories playable at the Konami booth inside the convention floor.  Some members of the press were treated early though to a roundtable featuring some of the cast members and the director of the film. We were lucky enough to be included, so read on to see what the cast had to say about working on this new project.

Silent Hill Revelation 3D will arrive in theaters just in time for Halloween on October 26, 2012 as the sequel to the hit film Silent Hill.  On hand to discuss their work were actors Adelaide Clemens, who will play protagonist Heather Mason and director Michael J. Bassett.  The film centers on Heather as she and her father are on the run from dangerous forces beyond her knowledge.  Just before her 18th birthday, Heather has a discovery that shakes up who she thought she was.  This then leads to another world that seeks to trap her inside of it forever.   Bassett began by discussing the early casting process for the film.  "Kit (Harrington) came in to audition for me and Game of Thrones had not been shown yet, and I knew that it was going to be him in this role.  Then Game of Thrones came out and suddenly we've got John Snow in our movie! It's weird the way things work like that because this really is a small industry in some cases."

A question came up about what knowledge viewers would need to have about the world of Silent Hill in order to understand the film, "None," said Bassett, "there are reasons in the movie given and explained for the change in main characters from the first film to this one.  This is an adaptation of the third game.  I had to make it a movie that stands alone.  It’s a bout a young heroine who finds the truth about herself, and that's a story that any viewer can appreciate."  Adelaide Clemens talked about her own exposure to the world of Silent Hill in getting ready for this role.  "I started playing the games to get ready, and the franchise of these games was an added bonus. I was drawn to the part itself first and the psychological pieces of it. This film takes place six years after the first, so I wanted to create a character in my own unique way.  "  Bassett added, “It was good in a way that she wasn’t too familiar, as it meant that she was going in to the filming looking at this as a character piece.  Which was great."

In discussing what about the role was difficult, Clemens referenced the physicality of the film.  "It was quite tough.  There's constant physical falling, running, endless running.  I remember one of the final sequences we shot, me running through a ton of  ashes, sometimes a mile or mile and a half at a time.  That was tough but exciting.  I loved it. Sometimes the shoot and the running would get physical and a camera would glitch but I couldn't hear them telling me to stop because of what I was doing, so it was quite a job!  On top of that, figuring out Heather and her state of mind was an exciting piece of this as well."

Sound, set design, and the creatures from the Silent Hill world rounded out the field of questions from the assembled press.  For set design, Bassett discussed trying to really capture as much of the real world as possible.   "The design of  the set is not really much green screen.  We retrofitted this film and sets to have the Silent Hillfilm feel.  We spend more time in the real world and giving Heather time in her environment before we begin peeling that back, so we really tried to avoid too much added effects."  Clemens added, "What attracted me about this role was that real world environment that gets established before things start to change.  I think people will have a lot of empathy for this character because of the setting and world of this film."  In discussing the decision to make the film 3D, Bassett discussed the change from the first to second movie.  "The first film was so beautiful and you can like the game or not, but you can’t deny the film was beautiful and artistic.  What we’re doing with this movie with 3D is to draw you into that world more and more.  Shooting in 3D is slower and harder, and one of the challenges for me when Silent Hill wanted to do 3D was how the aesthetic could involve the audience. You can make things more or less 3D.  We could draw them in or distort the world for them that way."

For the score of the film, Bassett made the press assembled very happy by discussing that.   "The thing is, when you play the game, and I played them, the sound design, and Akira [Yamaoka] did the sound design and the music, it just really makes it.  There was no way I was doing it without him.  We have original Akira music and sound as well as some remixed and altered pieces in this film as well."  As for the monsters used in the film, Bassett was a little more mum on the subject, "   There will be some fan favorite creatures from the first movie, but I love people in costumes on the set.  We did some CG enhancement, but the intention nwas always to create a real world with monsters as real as we could.  The psycholocial aspect of the monsters reflect what they represent to Heather and the story.  I can only do what works for me and that world."

Will Matt Cardona Ever Go Back to WWE?