With news that the latest big screen iteration of Spider-Man will set the character back in high school, we thought this next edition of Silver Age Silliness – the list feature that looks at some of the more quirky moments from some of our favorite superhero comics – would revisit the Stan Lee/Steve Ditko era of Amazing Spider-Man.

Lee/Ditko's Amazing Spider-Man is considered one of the greatest creative runs in comic book history. But that doesn't mean that these issues aren't filled with their fair share of odd scenes, character beats and visuals. So while marveling at the genesis of this wholly unique character, let's also poke some fun at Amazing Spider-Man in the Silver Age. 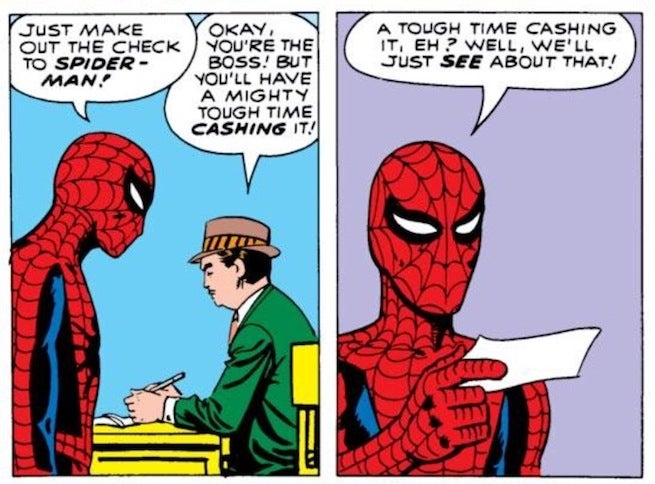 Part of what made Spider-Man such a phenomenon in the early 1960s was the relateability of the character under the mask, Peter Parker. Stan Lee and Steve Ditko managed to create a character in Peter who had deal with real life issues – like high school, girls and paying his rent – alongside his superhero problems. This dichotomy was best on display in this incredibly quirky moment from the first issue of Spider-Man's solo series, Amazing Spider-Man. Despite the death of his Uncle Ben (in Amazing Fantasy #15) teaching him that "with great power there must also come great responsibility," in ASM #1, Peter is still trying to get rich from his Spider-Man persona. However, Peter is also insistent on keeping his identity as the masked Wall Crawler a secret.

As a result, Peter is faced with a rather pragmatic, but odd problem for a superhero – when his agent cuts a check for one of his performances, per the high schooler's request, he makes out to "Spider-Man." When Peter goes to cash the check (in costume), the bank teller rejects it, telling him that anybody could impersonate Spider-Man. From that point on, Peter realized that he could either make money as Spidey or give up his secret identity. And considering the amount of bad press Spidey was getting thanks to newspaper editor J. Jonah Jameson, he opted to keep his secret identity I bet Captain America doesn't have problems like this. 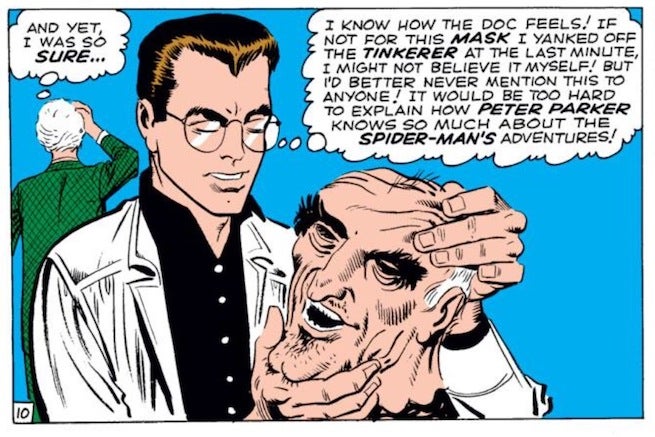 2. The Tinkerer is an Alien

The Lee/Ditko era produced some of the greatest comic book villains in the medium's history – a veritable who's who of bad guys including Green Goblin, Doctor Octopus, Lizard, Sandman, Kraven the Hunter, Electro and Mysterio. Unfortunately, not every rogue Lee and Ditko created in the beginning was a winner, and in the case of the Tinkerer, who made his debut in ASM #2, not only was the character pretty meh, but the writer/artist made the curious choice to make the old man into a space alien.

The thing is, the comic book world was filled with little green men playing the role as villains during the Silver Age. But when compared to all of the great rogues who followed the Tinkerer in Spider-Man history – characters, who, like Spider-Man, featured elements of realism and relateability – casting one of the Web Slinger's first baddies as a space alien feels absurdly out of place, both in the moment and in hindsight. So much so that the character went 13 years between his first and second appearance (when he was brought in during the Bronze Age for the equally ridiculous – but wonderfully titled – "My Killer, The Car!" storyline).

Flint Marko, aka, the Sandman, may be one of Spider-Man's more famous rogues (and was featured in Sam Raimi's Spider-Man 3), but on paper, the concept of the character is sorta weird: a guy whose molecular structure is severely altered by an atomic accident and is transformed into a shape-shifting sand-person. As such, Sandman's first appearance in ASM #4 ends up being one of the quirkiest Spider-Man/villain fights in the book's history.

After Sandman shows up at Midtown High School to get a diploma because … why not … Spider-Man and Flint duke it out in the janitor's supply room. After struggling to land a good punch, Spider-Man sucks up Sandman using a vacuum cleaner – making Flint the first villain in the history of comics to get defeated via a cleaning device (though the Justice League defeating a villain using lime still takes the cake for absurdity). But the silliness with Sandman doesn't end there. At this point in Spider-Man history, Peter is still relatively new as a freelance photographer for the Daily Bugle newspaper, and he forgets to set up his camera during his fight with Sandman. So Spidey picks up some random bits of sand that landed on the floor, tosses them in the air, and photographs himself punching the granules. 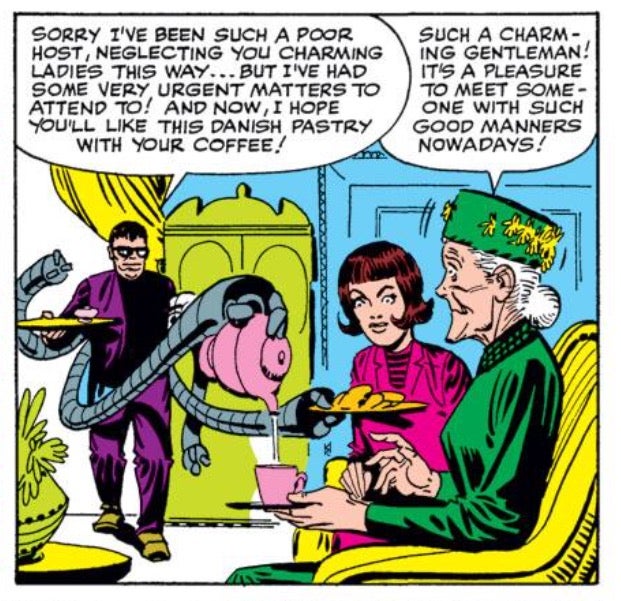 While the character did have her moments, Silver Age Aunt May always came across as more of a plot device than an actual, living human being – an elderly albatross whose sole reason for existing was to complicate Peter's life by causing financial hardship and/or threatening to die. That's what makes her portrayed in the very first annual issue of Amazing Spider-Man so weirdly insane. The issue marks the very first appearance of the supevillain supergroup, the Sinister Six – a group of six rogues led by Spidey's (then) arch-nemesis, Doctor Octopus. As a means to draw Spider-Man out for a fight, the Sinister Six kidnap Betty Brant, a woman they've realized Spidey must care about since he's rescused her a few times. Aunt May happens to be there when Betty gets abducted, so she gets captured too.

Where things get weird is when May and Betty are sitting there with Doc Ock in his house. Betty is worrying about whether or not she's going to survive the experience, but May is completely oblivious to the danger she's in. Instead, she spends the bulk of the issue swooning over Doctor Octopus, commenting on what a wonderfully courteous man he is since he brought the ladies some coffee and danishes. It was the first glimpse of any real personality for May in the series, but since it comes some far out left field, it comes across as quite absurd. It did, however, serve as some wonderful foreshadowing for the Bronze Age story the features May and Doc Ock getting married. 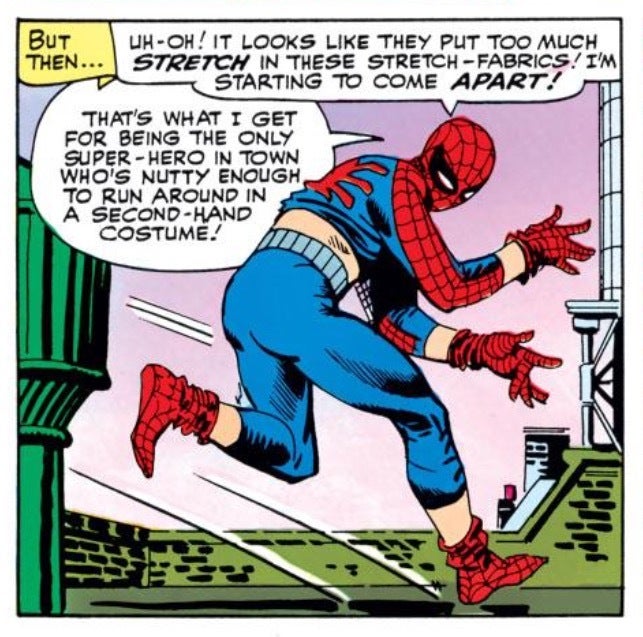 Spider-Man's everyman problems didn't just stop at "inability to cash check in costume" (see entry No. 1). Additionally, the Wall Crawler occasionally had a difficult time with an ill-fitting costume.

In ASM #26, Aunt May takes Peter's Spider-Man costume because she finds it absurd that a young man like him was playing dress up as a superhero. Rather than spoil his secret identity with his aunt, Peter instead buys a replica Spidey suit from a costume shop so he can continue superhero-ing. The only problem with his idea is that the costume is a cheap knock-off and it keeps bunching up on Peter as he's swinging about fighting crime.

In a great bit of Chekovian-esque writing, the cheap costume ends up saving Spider-Man from being unmasked. In order to keep the suit from bunching up, he uses his webbing to secure his threads into place. When he's captured by the Green Goblin and the Crime-Master, neither can get his mask off him because of the sticky webbing.