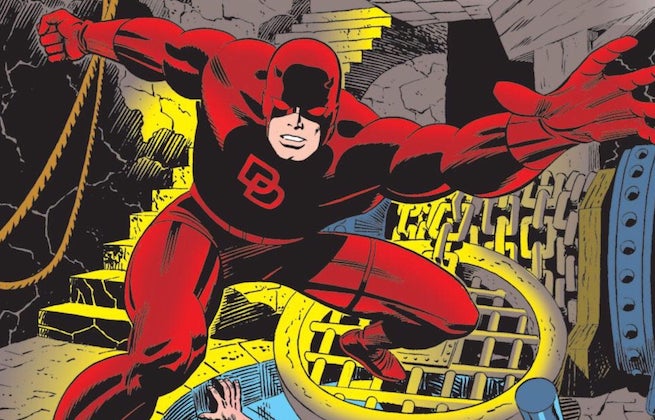 Well before Daredevil became synonymous with dark and gritty crime noir stories, he displayed a softer, sillier side — and we're not just talking about that yellow costume.

In the latest installment of Silver Age Silliness, the recurring list feature that playfully mocks superhero comics from the early 1960s, ComicBook.com is going back to the Man Without Fear's earliest days.  Created by Stan Lee and Bill Everett in 1964, Daredevil existed in the Marvel Universe for several years before it found a theme and an aesthetic that would transform the series and titular character into a phenomenon.

Let's be honest: The following Silver Age scenes will certainly be too goofy for the upcoming Daredevil series on Netflix. Thankfully, we can relive all of these quirky moments via the Marvel Unlimited app and Marvel's Essential trade paperback series. So let's set our radar senses to silly and run through some classic Stan "the man" Daredevil. 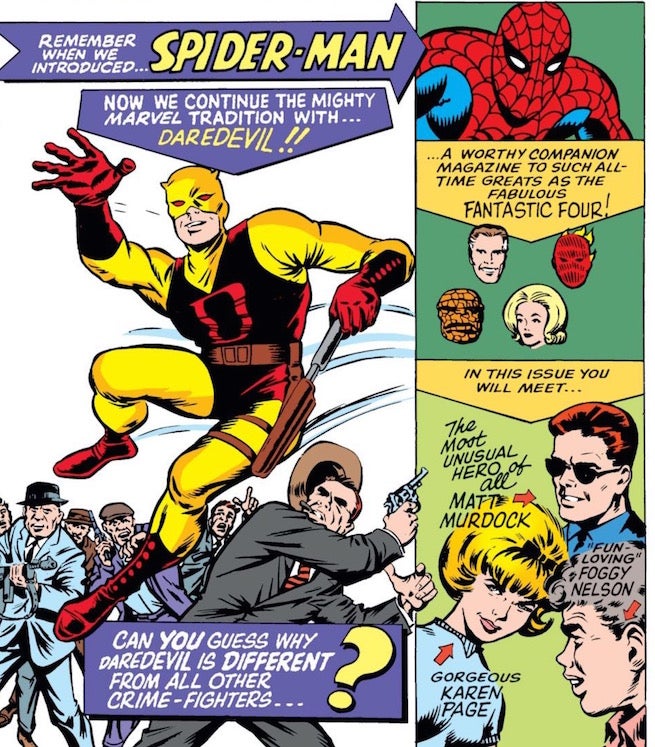 Honorable Mention: Whose Book is This?

While not technically a silly moment from an actual Daredevil story, this instance instead refers to Marvel's odd, borderline-insecure sell job of the series' first issue. When Stan Lee started building his superhero universe in the early 1960s. He was the master of cross promotion, often shoehorning characters from different titles like Spider-Man and the Fantastic Four to interact, team-up, and fight. But for the cover of Daredevil #1, Lee had Jack Kirby and Bill Everett throw Spider-Man on the cover – not because he was actually part of the story, but to let readers know that Daredevil was superhero in the same vein as Spider-Man. They double down on this trick when Spidey appears on Everett's opening splash page. Again, Spider-Man was nowhere to be found in this story, which details Matt Murdock/Daredevil's famed origin. One has to wonder how many fans were enraged after they picked this comic off the rack in 1964 and found no web slinger in the book. 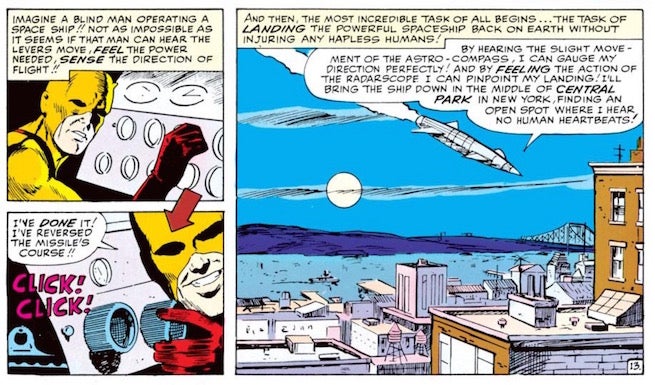 Apparently, graduating with top honors from law school also qualifies one as a certified astrophysicist capable of piloting  rockets and other incredibly complex equipment.

When battling Electro in Daredevil #2, Daredevil is launched into space via a stolen space missile. Lee's script acknowledges the incredulity of a blind man's ability to safely pilot a rocket back to Earth, but, you see, Matt's radar sense allows him "hear the levers" and "feel the power needed" to achieve the task. Of course, even a person with 20/20 vision wouldn't be able to pilot a rocket without proper training, but that radar sense is some pretty potent stuff.

Discretion is for fugazis ("fake tough guys"). At least that's the case when you're Leland Owsley, the Silver Age crime lord known as the Owl. When the feds try to take down Owsley with tax fraud charges, the villain seeks Nelson and Murdock to defend him. But really, that's all just a lead-in to a Joe Orlando splash page depicting the Owl's lair in all of its gaudy obviousness. Granted, Owsley clearly thinks he's untouchable from the law, but one would think a known-crook nicknamed "the Owl" would find a less obvious place to dwell than a huge mansion shaped like an owl's face--let alone one that overlooks the densley populated island of Manhattan. If the Kingpin was introduced in Silver Age Daredevil, would his home look like a bowling ball with a crown on top?

Stan Lee, in all of his sentimental glory, naturally needed to script a soppy love triangle between Matt, Foggy and their beautiful assistant, Karen Page. But for reasons that only Lee can explain, Matt's blindness was the main obstacle blocking any romance between Matt and Karen. In the above scene, Karen wonders how someone as "handsome" as Matt could possibly be blind, as if one's disability has anything to do with their looks. Granted, this was the 1960s, a completely different time socially. But still, was the audience really supposed to believe that if Matt could see, he would somehow become more or less attractive (and more desirable to Karen)? It would have made more sense (but still be incredibly insensitive) if Karen said, "Matt is so handsome. It's a shame he's blind and wears those stupid sunglasses all the time." But in Karen's world, true love can't be blind.

The Daredevil vs. Sub-Mariner fight in this issue doubles as one of the most epic David vs. Goliath confrontations in comic book history, and is easily the best Silver Age Daredevil story. Sadly, the throwdown's entire premise is built on the ridiculous notion that Namor wants to sue all "surface dwellers" for their collective abuses of the sea. Even Matt laughs off Namor's total ignorance of jurisprudence. Once Namor learns that he won't get what he wants, he (*shocker*) goes on a huge rampage through New York. The Avengers and Fantastic Four must have been on their lunch break, as its Daredevil who swings in to fight someone who's way over his pay grade.  The fight is great, but again, it's just a pity that Stan Lee and Wally Wood needed such an absurd reason to bring these two characters together. 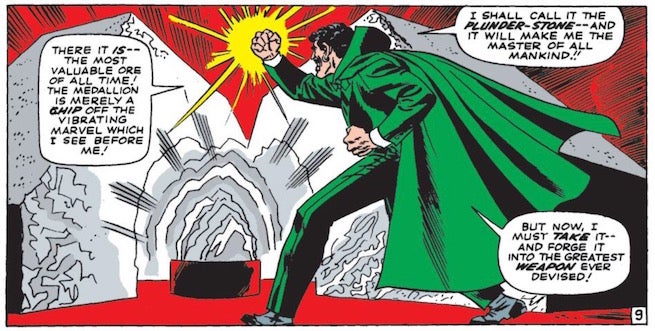 Yes folks, the rumors are true. Not all comic book MacGuffins are created equal. For every super weapon that provokes the mind to consider powers that extend well beyond space and time (or built around some well-delivered alliteration), there's something as inelegantly named as the Plunder Stone. And who wields the Plunder Stone? Why, the Plunderer, silly. Don't know who he is? He's Ka-Zar's brother, whom the Punisher apparently killed decades later in Civil War (it's later revealed to be a body double). That's about it when it comes to his legacy. And sadly, the Plunderer wasn't even the worst Daredevil villain introduced during the Silver Age. Ever hear of Duke Klaus Kruger? Check out Daredevil #8 if you want a hearty guffaw.

Which Silver Age Daredevil stories do you find the silliest? Let us know in the comments below.