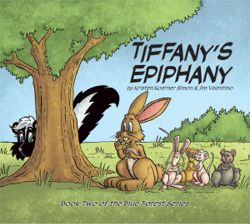 Silverline Books, which is the children's book imprint from Image Comics, has announced a new book called Tiffany's Epiphany. The book is written by Kristen Koerner Simon and illustrated by Jim Valentino. Tiffany's Epiphany will expand on the world made popular in Bruce The Little Blue Spruce, and the story will focus on the downsides of being a bully. "Tiffany's Epiphany presents an important moral in a humorous and lighthearted fashion that is still fun for kids to read in the Blue Forest Series tradition," said illustrator and Silverline Publisher Jim Valentino. "While I've worked on just about every type of comic book or graphic novel you can imagine, working on children's books such as Tiffany's Epiphany has proven to be very fun. Kristen and I look forward to continuing to visit the friends of the Blue Forest series for a long time to come." Tiffany's Epiphany will include the return of characters such as The Four Lovable Field Mice and Jack the Rabbit. In the story, newcomer Tiffany the Skunk is bullying all of the other animals in the forest. Jack the Rabbit confronts Tiffany and teaches her about the loneliness of being a bully. Tiffany's Epiphany is a 32-page full color children's book with a suggested retail of $12.99. The book is scheduled to arrive in stores on September 16, 2009.