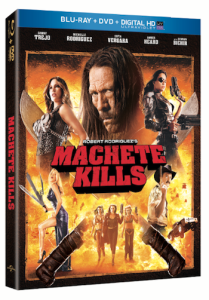 , the latest action movie from Sin City and Spy Kids director Robert Rodriguez, will be available on Blu-ray and DVD January 21, 2014.

Universal Home Video released the information today, along with a list of the special features attached to the disc, which will also be available as a Blu-ray Combo Pack including an Ultraviolet copy.

The Blu-ray will include deleted and extended scenes as well as a making-of documentary.

Originally inspired by a fake movie trailer attached to Rodriguez and Quentin Tarantino's Grindhouse double-feature, Machete Kills stars Danny Trejo as legendary ex-Federale Machete Cortez, recruited by the U.S. President to stop a crazed global terrorist (Mel Gibson; Braveheart, Edge of Darkness) from starting a nuclear war. With a bounty on his head, Machete breaks all the rules as he faces death at every turn from an all-star cast of deadly assassins.