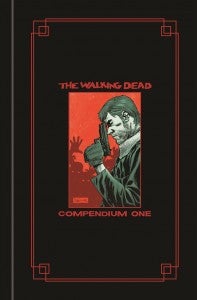 and Thief of Thieves Volume 1: I Quit will both be released as New York Comic Con-exclusive hardcovers at the event next month, according to a press release from Skybound.

The Walking Dead Compendium Volume 1 has been one of the biggest hits of the last few conventions that The Walking Dead creator Robert Kirkman has attended, but a new variant of the San Diego Comic-Con hardcover, this one swapping out the original's gold foil for red, will be available exclusively through New York Comic Con in a limited print run of 1,500. The cost of the book will be $100, as it was at San Diego Comic Con, but it doesn't appear as though they'll be doing the lottery system that they did to decide who could buy it at San Diego. 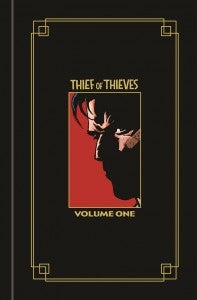 Thief of Thieves Volume 1 will also be available in a New York Comic Con-exclusive hardcover edition, which will run $30 and is limited to a print run of 1,000 copies.

Kirkman is also scheduled to appear at a pair of panels--the official Skybound panel and then another that's a Kirkman-specific Q&A (his popular "Kirkmania" panel), in addition to a handful of signing appearances at the Skybound booth, one of which will be an advance signing of his forthcoming prose novel, The Road to Woodbury. The book was co-written with Jay Bonansinga, who will also appear at the signing, and is a sequel to The Rise of the Governor, last year's best-selling novel by the pair set in the world of The Walking Dead. It's scheduled for release on October 16, but copies will be available at New York Comic Con.

You can check out the press release below, which includes details on the times and dates of Kirkman's signings and panels, as well as a look at Witch Doctor, the fan-favorite Skybound title that Brandon Seifert and Lukas Ketner are releasing a sequel to in November.

The Walking Dead creator/writer Robert Kirkman and Skybound, his imprint at Image Comics, have special items and events planned for this year's New York Comic-Con from October 10-14th. At NYCC, Kirkman will participate in panels including a question and answer session about his work, and a panel discussing the success of Skybound. Skybound will also debut two new hardcovers at NYCC: The Walking Dead Hardcover Compendium (Red Foil Version) will be a limited edition of 1500 for $100. The first-ever Thief of Thieves Hardcover, Volume 1, "I Quit" will debut with a limited edition of 1000, available for only $30. Both may be purchased at the Skybound booth, #1229, along with all your favorite Skybound titles, t-shirts and merchandise.

In New York, Kirkman will also be signing copies of The Road to Woodbury, his and Jay Bonansinga’s latest Walking Dead novel for St. Martin’s Press. The book is the sequel to last year’s bestseller, The Rise of the Governor, and will be released October 16th.

Skybound will also keep you posted on where you can buy The Walking Dead: The Official Magazine, which debuts from Titan/Skybound on October 23 and features an interview with Kirkman and The Walking Dead artist Charlie Adlard, and is chock full of art, news and interviews from the entire The Walking Dead universe.

Two beautiful Skybound hardcovers will debut at NYCC. First up, The Walking Dead Hardcover Compendium (Red Foil Version) will be a limited edition of 1500 for $100. Next up, the first-ever Thief of Thieves Hardcover, Volume 1, "I Quit." will debut with a limited edition of 1000, available for only $30. Both may be purchased at the Skybound booth, #1229, along with all your favorite Skybound titles, t-shirts and merchandise.

You've been dying for the latest news on Witch Doctor and creator/writer Brandon Seifert and creator/artist Lukas Ketner will be there to entice you with details about the November 28 release of Witch Doctor: Mal Practice #1. Also, come welcome editorial director Sean Mackiewicz as the newest member of the Skybound team.

There’s no limit on what to expect from Skybound, Robert Kirkman’s imprint at Image Comics. Thief of Thieves is already a breakout hit that has been optioned by AMC, Guarding the Globe supplies another monthly fix for the Invincible universe, and the all-ages smash Super Dinosaur is about to blow up in a big way. Join Robert Kirkman as he discusses the imprint’s future with his stable of creators, including the creative teams behind Thief of Thieves, Witch Doctor and more!

Kirkmania! Robert Kirkman takes questions from the audience Date: 10/14/2012 Sunday Time: 1:30PM - 2:30PM Location: 1E13 (seating capacity 1200) Robert Kirkman, creator of the global sensations The Walking Dead, Invincible and Thief of Thieves, opens the floor to all his fans in this lively and engaging Q&A session.