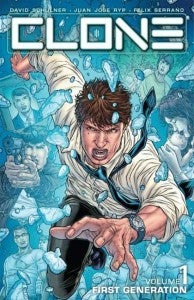 , the Skybound comic book series created by Davis Schulner, has landed a deal at NBC Universal, with the hope of being picked up as a network series.

The deal comes as part of Schulner's overall deal with Universal; Schulner will adapt the comic and produce along with Skybound's Robert Kirkman, creator of The Walking Dead.

The Walking Dead's David Alpert will also produce, along with David Engel.

Clone is a thriller with a science-fiction twist: What if there were more of you? And what if you could save those versions of yourself from being killed? The show's themes of identity and nature versus nurture are intrinsic to the tale.

"I knew if I went off the rails too badly, Robert [Kirkman] would be there to put me back on track," Schulner said. "Now I've been writing the comic for two years, issue #9 comes out next week and I just finished writing issue #15, so to be able to turn it into a television show is just icing on the cake."