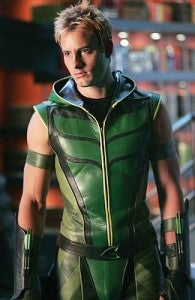 While many are whispering rumors that the upcoming season of the hit TV series Smallville, the series' ninth, will be its last, there are some that are suggesting otherwise, most notable among them Justin Hartley, the young actor who plays quiver-slinging archer Green Arrow. Hartley addressed the rumors and theories head on when talking to Sci Fi Wire."The producers are so busy ight now, they don’t know if they’re doing one more season or eight more seasons or two more seasons,” Hartley said. “They have no idea. So we’ll see. I’ve spoken to them a couple weeks ago and had kind of a vague conversation with them about concept and stuff.” He even suggested that his character of Green Arrow could be in for some complex trouble this season, maybe even some that could complicate matters for him, as a hero and personally. It would seem that the show has no plans of slowing down, especially with recent announcements such as the addition of British actor Callum Blue to the series in the role of villain General Zod. Big plans await the series this fall, no matter what its fate past the spring of 2010!

Smallville Ending? Not According to Green Arrow!