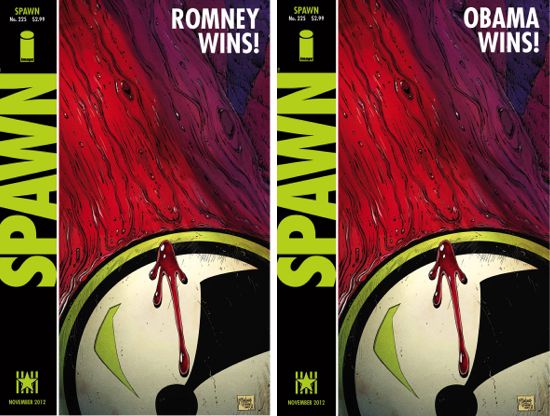 During and right after the last Presidential election, a number of comic books got political and featured Barack Obama on the cover. Now, Todd McFarlane's Spawn is jumping into politics with two different covers. Spawn #225 will feature one cover that says "Romney Wins" and another cover that says "Obama Wins." According to Image Comics, the results of the upcoming Presidential Election will directly affect the events to come in the Spawn comic. The description for Spawn #225 reads, "On November 6th, the citizens of the United States of America will select their Commander In Chief. The winner, and his goals and agendas, will play a role in shaping the next stage in Jim Downing's evolution." In a notice to retailers, Image Comics clarifies, "This issue contains two alternate endings – one featuring Barack Obama, the other Mitt Romney. Both are available to order using the unique product codes listed in the order form." For those of you who haven't read Spawn in awhile, you might be wondering who is Jim Downing and what happened to Al Simmons. Well, Jim Downing is a white guy who replaced Al Simmons, an African-American and the original Spawn. Now, we wonder if any of the political pundits will read anything into that.

Spawn Comic Book Gets Political With Romney And Obama