The panel included Bendis confirming that his new Iron Man series will star Tony Stark, explaining some of the new things about his armor and more, and definitively saying that "ther is no reboot," even calling out the "rumor mongers who started that."

D'Lando started by talking about "True Believers," new $1 special editions of first issues, including Spider-Gwen, Ms. Marvel, Thor, and more - the first ten will all be female-led titles, and are hitting in September 2015.

Fall 2015 will also feature Cosplay variants. Marvel Comics has brought in cosplayers to feature on comic book covers, as shot by Judy Stephens of Marvel. Jay Justice, HurleyFX, and Sarah Jean Maefs were featured at the convention.

Bennett talked about A-Force, her comic co-written by G. Willow Wilson and drawn by Jorge Molina. The book is currently part of Secret Wars and Battleworld, but will be an ongoing series after the event ends. "A stands for Awesome," Bennett joked, and issue 2's full cover features Dr. Doom plaguing their last refuge on Battleworld.

1602: Witch Hunter Angela is the "loveliest experience I've ever had in comics," said Bennett, talking of the Angela story in general. "Here you get me and Kieron Gillen being extremely irreverant, and being really, really terrible people." They're introducing a 1602 era Guardians of the Galaxy in the series, as well.

Secret Wars 2099 was next, though David was yet to join the panel. The series features a new Avengers team and characters new and old from 2099. Future Imperfect is David's other Secret Wars series, and "The Maestro will be super important to some cool stuff happening after Secret Wars," D'lando teased. "It starts here." Purdin echoed, saying, "A lot of the stuff from Secret Wars will carry over into the world post-Secret Wars.

Inhumans: Attilan Rising is Charles Soule and John Timms' take on the characters for the event. "What I've tried to do is a life during wartime story," he said. "Doom runs Battleworld, and there's a resistance movement going on, and he's not happy about it. So he asks his regent on Attilan, Medusa, to shut down the resistance - then you find out that Black Bolt is the leader of it, and they don't know each other in this story." 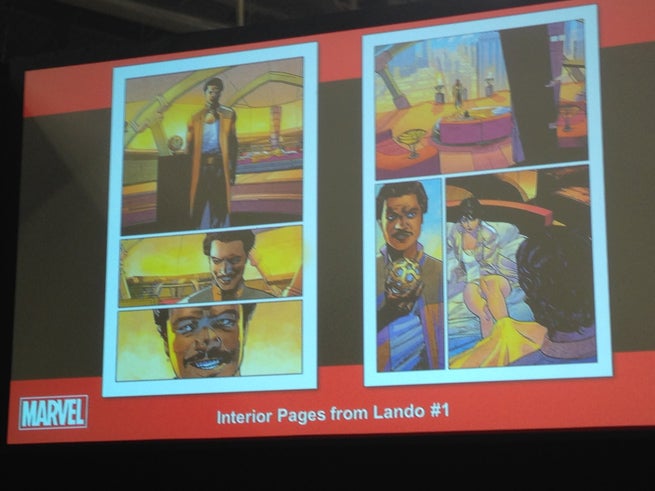 The writer is also joining the Star Wars corner of the company with Lando coming in July with artist Alex Maleev. "The story here is set between A New Hope and Empire Strikes Back. Lando is out in the galaxy, trying to get ahead. We don't know that much about Lando, really, he's only in about 15-20 minutes of the movies! We know he's a gambler, and he makes bad deals. So I figured he's a gambler who's kind of always chasing his losses.

"In this, he's been asked to steal a ship, and he gets a crew together. Lobot is part of his crew, he's a snappy dude, he's Lando's bud. There are lots of twists and turns, and he's the Lando that you want: he's smarmy and charming."

Pages from Lando #1 were shown on the screen for the first time.

Bendis got the spotlight with Old Man Logan, a Secret Wars story with Andrea Sorrentino. "It's a very daunting task, attempting to tell another story with Old Man Logan, which I think is one of the best modern Marvel stories. It's the best Mark Millar story, and an amazing Steve McNiven story, and when they weren't going to do a sequel, I just said, "Okay, I'll do it!""

Bendis praised Sorrentino's work as "exciting and original" and said working with him is "like getting to work with Bill Sinkevitch when he's first starting." Of course, as the teaser showed, Bendis said, "Of course, Old Man Logan needs to find his way out of Secret Wars and into the Marvel Universe proper."

Ultimate End is also out now with Mark Bagley. "It's us wrapping up the Ultimate Universe with the same collaboration that we had to start it. Issue five will answer all the questions you've had for me after issue 1."

The aforementioned teasers were shown next, but just as a tease. 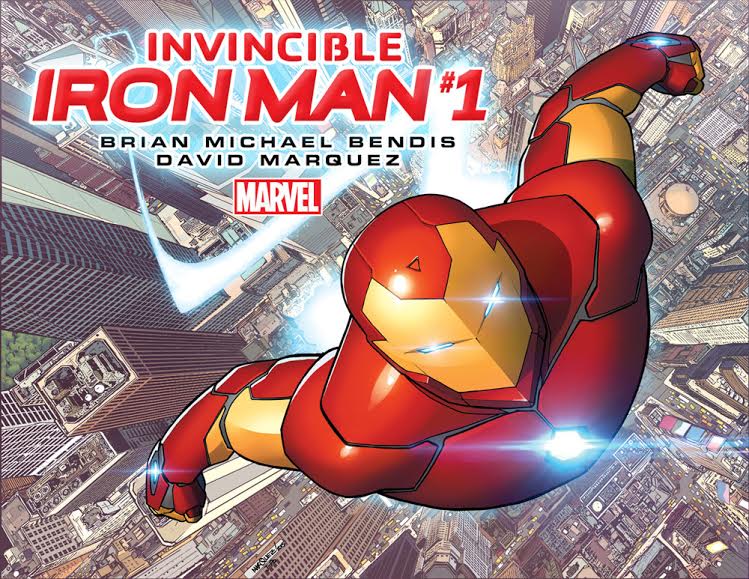 Finally, the announcement of Brian Michael Bendis and David Marquez's Invincible Iron Man #1. Justin Ponsor will also be there, the entire team of Ultimate Spider-Man. "We're tasked with taking the crown jewel of the Disney/Marvel empire. We're doing a new armor, a new girlfriend, and we will find out who Tony Stark's birth parents are," Bendis teased.

Bendis then deadpanned, "It's Thomas and Martha Wayne."

But he continued, saying, "Tony needs more villains for Tony, not just Iron Man. He needs more friends who are not Avengers. His new armor will turn into any of his 30 armors on the fly, so he can alter it to do whatever he needs at the moment.

A fan Q&A was next. During it, Bendis said, "There is no reboot coming. It was never planned to reboot. We don't need to reboot. All continuity is still there. What we do have is a way to be additive. We're making the Marvel Universe exciting and dangerous, because you won't know what the hell is going to happen."

Addressing the end of the Ultimate Universe, Bendis teased that "With the elements that are coming in, the way things are being addressed, it's really hard to be bummed about it as an Ultimate fan, I promise."

A fan blatantly asked "How important will the X-Men and Fantastic Four be after Secret Wars?"

"It's almost like someone at Marvel is screwing around with people that have X-Men paranoia," Bendis said. D'Lando pointed out the two Wolverines on the poster, as well as Ben Grimm, and said, "Stay tuned..."

Bennett delivered a message to aspiring female creators, "Don't Be Scared. I had one of the worst weeks of my life with hate mail, and it doesn't matter. I will prove to those people through my work that I'm not scared. I'm not going anywhere."

Bendis said his first reaction to the Secret Wars was similar to most fans, "I didn't want to do elaborate 'What If?' stories. As soon as we found out that what we were doing would influence the Marvel Universe after, that we were going to be dropping new things into the Marvel Universe, I was excited."

Bendis was asked about the 616 Miles Morales and the follow-up to the end of Spider-Men, when Peter Parker looked for him in that universe. "We will find out about that after Secret Wars."

War Machine will appear in the Invincible Iron Man series eventually, but Bendis wants to focus first on making the new supporting cast shine. "When he needs Rhodey, he'll be there." There will also be people "from the Marvel Universe that he hasn't had a close relationship yet that will shock you when they interact."

Marvel's Next Big Thing: "There Is No Reboot Coming" - Special Edition NYC