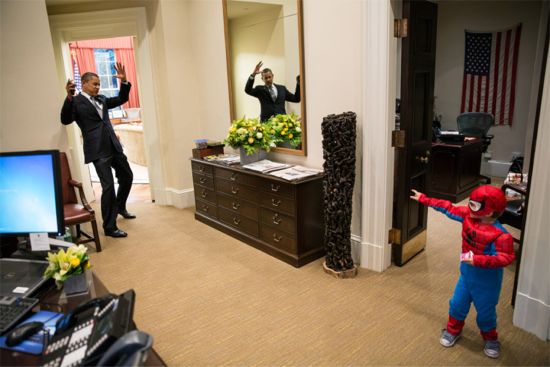 If you’ve been online today, then chances are you’ve already seen this photo of a pint-sized Spider-Man taking on President Barack Obama. Comicbook.com shared it earlier today on our Facebook page. On President Obama's own Facebook page, the photograph has already received half a million likes and over fifty thousand shares.

While there is some question as to who will be Spider-Man in the new Superior Spider-Man series, this particular Spider-Man is the son of a White House staffer. The photo was taken by White House photographer Pete Souza, whose job it is to document the life of the President in photos.

While people are sharing the photo across social media because it shows a very human side to the President, it likely brings back memories for comic book fans. After President Barack Obama was elected to his first term in the White House, Marvel Comics turned the Amazing Spider-Man #583 into an Inauguration Day special, featuring President Barack Obama on the cover. The issue proved to be a huge hit, requiring several reprint editions to meet demand.