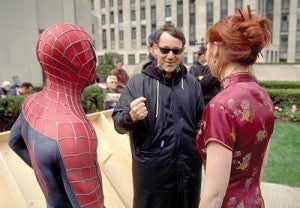 Sam Raimi, whose Oz the Great and Powerful has been dominant at the box office for the last two weeks, will reportedly direct and executive produce the pilot for Rake, an hourlong comedic drama starring Greg Kinnnear.

Deadline reports that Rake, which is slated to go into production in a few days, is based on the Australian series by the same name and was developed for U.S. audiences by the original series’ creator Peter Duncan and Peter Tolan, follows the chaotic and comedic life of criminal defense lawyer who is brilliant, frustratingly charming, and with zero filter.

Rake will be Raimi’s first pilot after a career in features. In addition to directing, he will serve as an executive producer on the pilot alongside Duncan, Tolan, Michael Wimer, Richard Roxburgh and Ian Collie. Kinnear is co-executive producing.

Spider-Man: No Way Home Will Only Play in Movie Theaters