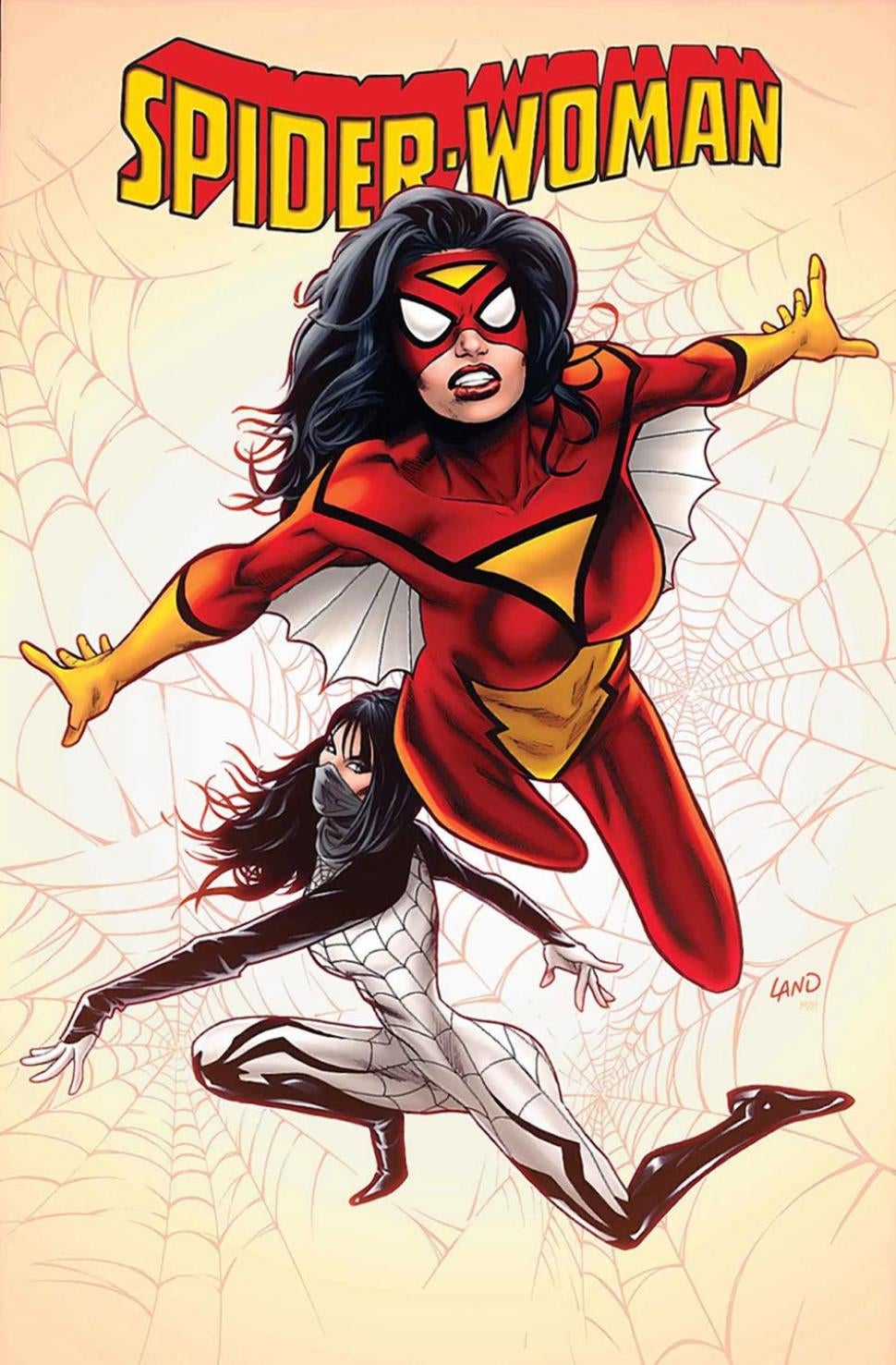 There has been a lot of talk surrounding the new Spider-Woman series, but very little about the series itself. Milo Manara's cover has received much more attention than Dennis Hopeless and Greg Land's work in constructing a story centered on Jessica Drew, Spider-Woman. Their first issue begins in the middle of the massive Spider-Verse event. Spider-Woman is on a multiversal mission along with Spider-Man Noir to protect Silk from the villainous Inheritors.

That synopsis requires a lot of unpackaging and exposes the biggest problem with Spider-Woman #1. It's a tie-in to a complex crossover and requires some amount of foreknowledge despite being labelled as a first issue. The recap page that most comic readers skip over is mandatory reading for this issue. Readers are forced to play catch up with a variety of events from other series and miniseries. Due to this setup Spider-Woman #1 is never able to function as an introduction to a new series. This isn't something that writer Dennis Hopeless can be faulted for, but it is a significant handicap that he is forced to maneuver.

Once Hopeless establishes the context of Spider-Verse and the drive of this tie-in story, things begin to flow more smoothly. The story centers around Spider-Woman and Silk equally. They are each presented with clear personalities that naturally contrast one another. Spider-Woman's world weariness and casual cynicism is balanced by the inexperience and naivete of Silk. Neither is caricatured by their outlook on being a superhero though. Hopeless applies an excellent sense of humor to avoid making their arguments tedious or facile. Spider-Woman plays the role of an older sister here. She wants to have fun and enjoy the experience, but is primarily concerned with  her responsibilities. It's easy to understand and like both women, even when they fill the role of buzzkill or make foolish decisions.

The dramatic engine that shows off these disparate personalities and world views is the world-hopping premise behind Spider-Verse. Three distinctive settings are presented in this issue alone, each with their own unique set of problems and antagonists. Despite the problems it brings as an introductory story, this aspect of Spider-Verse adds an element of fun and surprise to the issue that works well.

However, Greg Land's depictions of these settings is lacking. Spider-Woman's description of the place they are approaching on the first page is never matched by the illustration of the setting. A Manhattan carved out of gold is mentioned, but only appears as a vague collection of spires in the distant background of three panels. Most panels feature minimal details, if any at all. There are entire pages that only feature faces and forms eschewing any sense of place. The only place where setting becomes prominent is in 1920s New York City (notably the only location with obvious material for photo references). Fantastical landscapes of desert and ice are left to be defined by generic tents and generic buildings.

Land's character work is less skimpy than his backgrounds, but still reflects the use of photo reference material. Unlike some of his art in Ultimate Fantastic Four, there are no painfully obvious drawings of famous actresses or other sorts of celebrity. Poses still do not appear to be his own, but taken from modeled shots and the result is rarely as active as the scene is intended to be. The facial expressions of his women appear static and stiff. It's an improvement over earlier work, but still troublesome.

Frank D'Armata's use of color does far more than anything in Land's art to differentiate settings and characters. The different outfits of the various Spider-people all pop off of the page and are consistent with their iconic appearances elsewhere. Furthermore, he crafts a unique palette for each of the three settings in this issue. When characters enter the 1920s, they are overtaken by an amber hue that immediately conjures images of early gangster films.

Spider-Woman #1 is an issue that starts with its hands tied behind its back. It never has an opportunity to introduce its characters or premise because it's too busy attempting to catch up with an event. However, Hopeless does an admirable job of providing a reason to care about these characters. Land's negligible contribution doesn't actively harm the story, but fails to take advantage of the ample opportunities here. Spider-Woman holds potential, but has a lot of hurdles to overcome in order to develop its own personality and appearance.