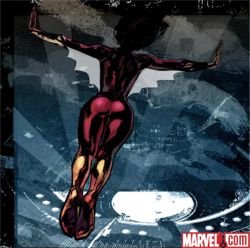 For me, I’m always going to be a print comic book guy, first and foremost. I enjoy the smell of the ink, being able to trade them with friends, and dreaming one day they will be worth a gazillion dollars. However, I have to say after taking a gander at the first episode of the much-hyped Spider-Woman motion comic on iTunes, I was pleasantly surprised. Of course, considering that Brian Michael Bendis is the writer, I guess I should not have been surprised that it told a good story with solid dialogue. The basic plot revolves around Jessica Drew (a.k.a. Spider-Woman) being recruited by S.W.O.R.D. to track down Skrulls (and other aliens). One of the funniest scenes is when Jessica is handed what is described as a “very cool doohickey that you can’t buy in any stores.” The device looks exactly like an iPhone. What really impressed me though is how good the actual motion comic looked. The concept of static images being moving around is a difficult one to pull off without leaving people feeling like they’ve just watched a really bad animated cartoon. However, Marvel does an extremely good job pulling it off. I don’t want to give away the ending of the episode, but suffice it to say there is a fight scene at the end, and I found myself really getting caught up in the action. Does it look as good as an animated feature? Of course not, but at the current price of only 99 cents, it’s more than a bargain. Motion comics won’t replace print comics for me anytime soon, but if Marvel keeps producing high quality motion comics like Spider-Woman, they will be a welcome addition to my reading list. Plus, I think the real benefit of motion comics is that the easy accessibility and relative inexpensiveness of the format could help bring in new readers who have never been to a comic book store before. New readers are important to keep the comic book industry growing. According to Marvel Comics, there will be five episodes of Spider-Woman, each running 10-12 minutes. The first episode will be available exclusively on iTunes for 99 cents for the first two weeks. After the first two weeks all episodes will cost $1.99.