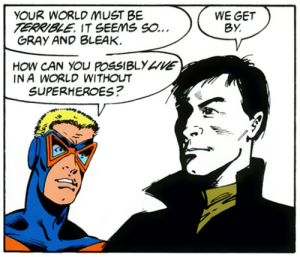 There are a number of typical Grant Morrison themes that run through the final issue of his two-year (ish) run on Action Comics, out now on Nook and later today at your local comic shop. For starters, we see sheet music (like we saw during some of Superman's key moments in Morrison's Final Crisis). We get Superman leading the entire planet into battle against the enemy together, as Morrison has written in JLA, 52 and Final Crisis. We get multi-dimensional constructs (although, given the nature and identity of the arc's villains, that's sort of a given. And, like we've seen so often in Morrison's work, we get a meta-textual peek behind the creative curtain, wherein the creator actually appears on panel alongside the characters. Morrison has done it before, of course, most notably in his Animal Man run, after Buddy Baker's wife and kids are killed. Baker traverses comic book limbo to find a man he's told can help him--only to discover that the man is Morrison himself, who sits down, talks about the meaning of the universe with Buddy, explains that he's just a comic book character who can be written to do all manner of things--and then saves the day. Sorry, spoilers. But really, you've had twenty-five years or so. 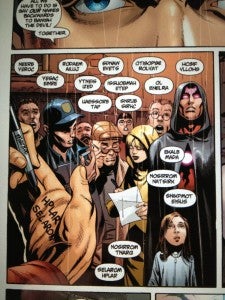 At any rate, there's a point in the story where we get to see Superman's impact on regular, everyday people and the way he inspires them to action. We see dozens of characters speaking, relatively in unison, all saying their own names backwards--and among them? Well, you can check out the image at right. Yep, that's Grant Morrison, Rags Morales and friends--and just in case the reader was tempted not to pay attention to that rewarding sea of word balloons, you've got the literal hand of the artist writing his name backwards on his own palm, in the foreground while the actual action of the comic book takes place in the background. "Meanwhile, elsewhere in the DC Universe, Animal Man can't decide between saying "Rekab Yddub" and "I can see you!"