It's midnight West Coast time here in the U.S., which means legendary comics writer and editor Stan Lee's ninetieth birthday is underway from sea to shining sea. Having spent most of his life working in and around comics, Lee has had an immeasurable impact on the industry, the art form and of course the commercial value of comics.

We thought it could be fun to break down ninety reasons to love Stan--one for every year he's been around--but just rattling off ninety memorable characters he had a hand in creating would be too easy. Rather, we wanted to divide it up into a few categories and get a bit of a cross section going.

For the most part, we'll just let these reasons stand on their own--it's pretty obvious why "Spider-Man" is a reason to love Stan, after all...but we'll explain some of them as we feel it's needed or adds something.

4. Aunt May and Uncle Ben 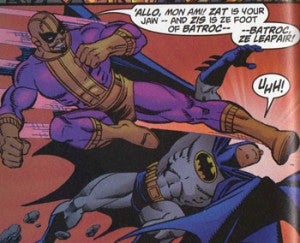 6. BATROC THE LEAPER
I'm sorry, but "Batroc the Leaper" is up there alongside "Balloon Buster" for one of the great comic names of all time.[/caption]

Because who doesn't love H.E.R.B.I.E.? Even if it's ironically? 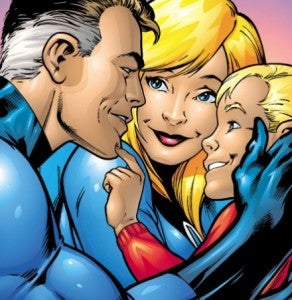 18. FRANKLIN RICHARDS
The first of his kind, Franklin was the son of major, popular characters who headlined their own comic book all the way from prior to his conception through his birth and beyond.[/caption] 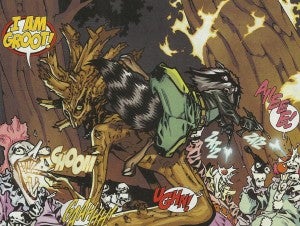 Whether intentional or not, Lee created one of the best love triangles in the history of comics, and two of the most beloved female characters in comics--almost certainly the two most popular who don't have powers.

The Marvel Universe would be a decidedly different place today if Stan Lee and Jack Kirby hadn't brought in dozens of characters they DIDN'T create--but reinvented to suit the Marvel Universe. Thor and his fellow Asgardians, Ares, Hercules and the rest are just the beginning--characters from mythology and public domain stories have always popped up in Marvel Comics, and usually enhance wherever they happen to be. 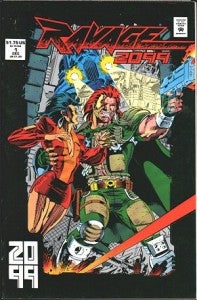 49. Any number of supporting characters

For years, Superheroes' supporting casts were little more than props, two-dimensional characters meant to put the hero into a situation to do his heroing and little more. With Marvel's character-centric approach came dozens of supporting characters who were fascinating people in and of themselves, and who made us care what happened to them because they were PEOPLE, not just because it meant the hero had failed.

52. Virtually Every Villain You've Seen in a Movie

Stan had a hand in creating Magneto, Dr. Octopus, Green Goblin, The Sandman, Loki, The Mandarin and lots, lots more. The Marvel movies that are making hundreds of millions of dollars at the theaters might exist without Stan Lee...but it's unlikely, and they'd have a distinctly different face if they did.

It's hard to imagine DC Comics or Marvel Comics at a time when there wasn't a "shared universe" and continuity to worry about, but while characters often shared the pages together, there was no really coherent drive to make any kind of unified world or timeline until Lee and Kirby did it with Spider-Man, Fantastic Four and The Avengers.

Grounding the Marvel Universe in New York City meant giving fans familiar scenery and places they could actually visit, rather than the more fanciful tradition of creating a fictional city for your hero to protect. It also made the city a very dangerous place to live, with all those supervillains hanging around.

At the time he and Jack Kirby started pursuing the "mutantkind as the oppressed people" metaphor, mainstream American comics were seen as disposable, popcorn entertainment for kids. Not really the perfect stage for the kind of story that would become so wildly popular later.

Ben Grimm was Jewish, and Peter Parker...well, he probably is, let's be honest. Falcon and Black Panther are some of the first non-white superheroes to play a major role in American comics. And all of these characters are co-creations of Lee's.

There's something just absolutely bonkers about the Just Imagine Stan Lee Creating... comics, and we love it.

Granted, it was done for convenience and speed, not for creative reasons, but "Marvel style" scripting--where the writer would plot out a story and then hand that off to the artist, scripting after he'd got the art back--changed the look of American comics forever.

Just look at the big debate between Xavier and Magneto; is there really a "clear" hero in that? It depends on who you ask. You don't get that kind of nuance with Lex Luthor.

Nobody particularly liked Spider-Man or the X-Men; Spidey, in particular, was unpopular in both of his personae and living a very modest, often humiliating life as Peter Parker. This was nothing like Superman, whose gifts were celebrated, or Batman, whose wealth made Bruce Wayne's life mostly a cakewalk.

When Gwen Stacy died, she stayed dead. Ditto her dad and, for years, the Green Goblin. The concept that there were consequences for choosing to be a hero was one of the things that really enhanced the heroism. There can't be true heroism without sacrifice, after all.

One of the many great settings of the Marvel Universe, the Danger Room was a real revelation in its time. Likely informed by military boot camps, the room became a staple of X-Men storytelling.

Stan Lee was the George Lucas of comic books; more than just about anybody he understood that these characters had value outside of the printed page, and he pursued it years before it was a viable thing.

The celebrity culture of today's comic book news and rumor sites can be traced back to Stan Lee's original bullpen, with their silly nicknames and personalities projected to the outside world in print.

The first comics podcast ever, this was available for free to fan club members...on record.

66. Helping to save the superhero

It's hard to imagine a world now where the superhero comic was nearly extinct in favor of other types of stories, but it was in no small part thanks to Lee and Jack Kirby that the superhero lived to fight another day after being nearly wiped out by Frederic Wertham.

67. How to Draw Comics the Marvel Way

This is one of those books that every artist and aspiring artist had on their shelf for years.

Stan Lee is pretty open about the fact that, following the success of Justice League of America over at DC Comics, he learned from a DC editor  how well it was doing and immediately set about getting The Avengers going at Marvel. Obviously, the two fill very different roles in today's comics marketplace, but back then the idea of creating a superhero team and slapping all of your biggest personalities in one book was a new one...but one so self-evidently good, Stan shamelessly took it and ran with it.

Part of Stan's persona for years has been his 'Nuff said, Excelsior-type catch-phrases. They call back to an earlier era in comics, and they're just so irrepressibly charming that you can't think about how silly they are. It's like Billy Batson's magic word.

Stan Lee started out as basically an intern, filling up ink bottles and bringing people coffee, before working his way into writing comics by first writing prose pieces as filler material and then finally writing some of the books themselves. Seems like it worked out for him.

71. His Underappreciated Work Outside of Superheroes

Before The Fantastic Four really took off, Stan spent years at then-Atlas Comics writing westerns, romance comics, science fiction and horror stories, including many for Jack Kirby. Most of that material is lost to the sands of time but it's pretty strong stuff.

72. His Service in World War II

Stan Lee served in the Signalmen from 1942-1945, being one of only nine men classified as a "playwright."

Working with everyone from Ringo Starr to Arnold Schwarzenegger, Lee manages to make comics as mainstream a thing as can be. Even if a lot of those projects never materialize, or aren't critically beloved, getting in front of more eyes and being seen in a number of different lights is good for the industry and the art form.

74. Still Working After All These Years

Try going to a major convention and NOT seeing Stan Lee. It's difficult to do. Besides the fact that he's still developing ideas for comics, TV shows and video games, and still appearing on TV and in the movies, he appears all over the country to discuss his creations and the future of comics. At 90.

How did 89-year-old Stan Lee react to getting a pacemaker? By comparing himself to Iron Man. This is like a Chuck Norris joke. 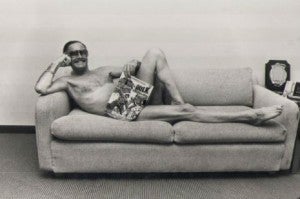 76. HIS CENTERFOLD SHOT
Because tell me that's not hilarious.[/caption]

77. His tweets are still cooler than yours

Just see this week's exchange with Dan Slott, for example.

78. He's got a sense of humor about himself

Did you ever see the episode of Chuck where he played a buffoonish version of himself who was crushing on, and rebuffed by, General Beckman? Hilarious.

79. He has absolutely no modesty whatsoever.

That might be clear from the centerfold there, but even above and beyond that, Stan has no problem doing something like Mallrats, where he just rattles off his accomplishments at the drop of a hat. In a younger man, it may be brash and egomaniacal. At Stan's age, it's just cool.

Not really, of course, but it sometimes seems like it. He's got a star on the Hollywood Walk of Fame and he's been inducted into two separate comic book halls of fame.

How long until they give him an honorary Oscar for everything he's done for Hollywood and all those movies he's been in?

81. Working with the Hero Initiative

Stan Lee, Joe Quesada and Kevin Smith released the Marvel: Then & Now DVD ages  ago to benefit the Hero Initiative...since then, it's been one of Lee's pet causes, providing for the needs of many of his onetime peers who didn't do as well as he did financially.

In fact, last year he asked his 89th birthday presents to be "shifted" to Hero.

One of a number of charities that promotes literacy through comics, the Stan Lee Foundation supports programs and ideas that improve access to literacy resources, as well as promoting diversity, national literacy, culture and the arts.

Ever notice how often Stan Lee says something offhand in an interview or at a speaking appearance, and it turns out to be news that he didn't know was still secret? We all have fun with that.

Stan Lee has been one of the first big names in comics to adopt things like digital comics and YouTube. Does it always work out for him? No, but he heads into his next venture undeterred, knowing he's got a long history of success to fall back on.

We love that you can play "Where's Waldo?" with Stan Lee in just about every movie based on one of his characters. Wonder if he'll get a gig as the S.H.I.E.L.D. janitor on TV?

Lee has appeared as himself in dozens of movies and TV shows, including the Eric Roberts/James Earl Jones stinker The Ambulance and Batman: The Animated Series.

In acting parlance, Stan Lee never, ever breaks character. Everywhere you see him, he's always got a smile on his face and an "Excelsior!" on his lips. He's been doing this for decades, and somehow he's not tired yet.

88. He gets to hang out with America Young

And plenty of other young, pretty things--but America and Adrianne Curry come to mind becuase they work with him at Stan Lee's World of Heroes.

Stan recently celebrated sixty-five years of marriage with his wife Joan. You think it's impressive for a celebrity to stay married to the same person for so long? Lee says it's easy; they've never had a fight.

Joan has just had a long string of victories.

Yeah, that's a little on-the-nose, isn't it? Oh, well. It's a good enough reason for us.

Stan Lee at 90: Ninety Reasons to Love "The Man"