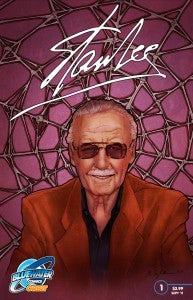 The successful run of Bluewater Productions biographical comic books is in for a real test this week with the announcement of a controversial Stan Lee book.

'Orbit: Stan Lee' follows a similar path of recent Bluewater comic books such as Martha Stewart and Steve Jobs by showing both the good and bad side of the title character. Fans of Lee might not appreciate an unbiased look at the legendary creator. It will be interesting to see how hardcore fanboys will receive the book.

Written by Jay Allen Sanford and illustrated by Blackwell, 'Orbit: Stan Lee' deals with still-0pen questions regarding the 'creation' of Marvel's best known creators. Illustrators such as Jack Kirby and Steve Ditko dispute Lee's opinion of who deserves credit. Should be an interesting story to read.