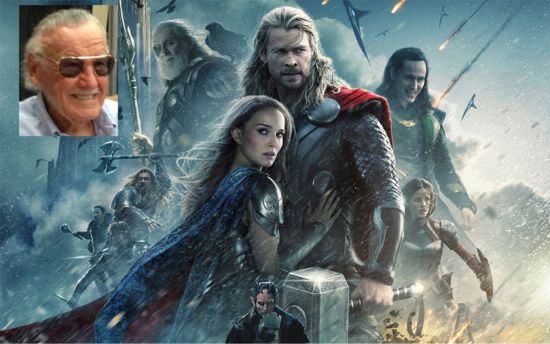 While pretty much every site on the Internet (including this one) has written something about the after the credits scenes in Thor: The Dark World, there has been relatively little written about Stan Lee’s cameo, which is surprising since a lot of people go to see Marvel movies just for the Stan Lee cameos. We know this to be true because Stan Lee says so.

Because Loki took over Dr. Erik Selvig’s mind in the Avengers, he appears to have gone just a little bit crazy. In once scene, Dr. Selvig is shown getting arrested for running around Stonehenge naked.

In a later scene, Dr. Selvig is ranting and raving about cosmic abnormalities. In order to explain his theories, Dr. Selvig visualizes what he is describing by smashing two different shoes together. At the end of his speech, Dr. Selvig asks, “Any questions?” The camera then pans out to reveal that Dr. Selvig is in a mental ward, lecturing to the other patients. One of patients is Stan Lee, who replies, “Yeah, can I have my shoe back?”