The About Heroes Podcast was on hand at the Boston SuperMegaFest this weekend, when VIP ticket holders promised a Q&A session with comics legend Stan Lee surprised the iconic writer and editor with a surprise 90th birthday party.

And then, of course, put him right to work.

On Argo: "It's about time somebody used Kirby's artwork--God knows I've used enough!"

Presented with the 1963 Ben Cooper Spider-Man costume, he didn't know it even existed. "Marvel didn't tell me anything," Lee said. "I was in a little room telling the stories, nobody told me what was going on."

Spider-Man Lee's favorite character that he co-created "but I'm sure fond of the others, too." He also said he thought the casting on Spider-Man was great, and that across the board it's hard to find fault with the casting choices in the Marvel movies.

"I was very surprised--they took the fella who played the Human Torch and they made him Captain America, and he did a great job."

"The movies have done so much--all of a sudden because of the movies, I've become a celebrity."

That said, Lee told the audience that he preferred the version of the Lizard that he wrote, saying that in this summer's movie The Amazing Spider-Man, he was too evil. In the comics, Lee explained, he was a good man who didn't want to be the Lizard and wanted to change back--and Peter never really wanted to hurt him.

On Who Wants to be a Superhero?: "I'd love to bring it back, but it isn't my decision. The network did it for two seasons and after that they dropped it. I guess it didn't get a good enough rating. So many people have told me that they loved it and that their kids loved it....I had another one that came after that called Stan Lee's Superhumans, and everyone who saw it loved it but the network didn't promote it at all. There was never one ad for it. It's still playing in Israel, and it's playing in little countries all over the world but it's not playing here anymore." 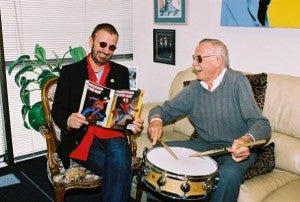 On Ringo Starr: "We were going to do something together--an animated cartoon, he wanted to be a superhero. Ringo, you're a sweet guy--you ain't no superhero. But we were going to come up with something funny. The best thing that came out of it was that we took a photo where I'm playing the drums and he's reading Spider-Man.

Are there any characters Lee wishes he had created? "Not really -- Bob Kane was a friend of mine; I don't want to take Batman away from him. I knew Jerry Siegel, so let the memory of Superman rest with Siegel and Shuster. There's one character that DC has that I get a kick out of and his name is Lobo. Because to me, he's not a typical DC character--he should be a Marvel character but we didn't think of him."

Lee's favorite comic book of all time: "I'm not big in favorites--there are so many things I like. One story that I was very fond of, which didn't become as famous as it should have--there was a Silver Surfer story that was illustrated by this great French artist Mobius, and it was called Parable. It was just a notch above the normal stories we had done. It sold well but the world didn't get excited about it and it's the world's loss--I can do nothing about that."

Why didn't Ant-Man get the same respect as some of Lee's other creations? "I'm gonna tell you what was wrong with Ant-Man, and it's partly Kirby's fault. I can't remember if anyone else drew Ant-Man....It should have been interesting to see him against things that are bigger but somehow the way he was drawn in the stories he didn't look that small. When they drew him, he looked like a normal guy. They didn't put enough things next to him that made you appreciate how small he was. In a panel, if he was trying to run away, there would just be a picture of him running. There should have been a picture of him running past a spool of thread or a pencil or something small so you got the feeling he's small but when you looked at the artwork you didn't get the idea that it was about a small man."

"But they are working on an Ant-Man movie and believe me when they say they'll have him up against things that are much bigger--you'll know how small he is.

Lee said he doesn't get any say in what his cameo will be in any of the Marvel movies. He related a story about going to a film shoot once in a jeans ant a shirt and sneakers, then being sent to wardrobe to be refitted for a jeans, shirt and sneakers that were pre-approved by the film.

Asked whether he had input into the appearance of the characters he was writing in the '60s, Lee answered, "I was the art director at the time so I told the artists what to draw...but as far as the design of the costumes, I always left that to the artists. Steve Ditko designed the Spider-Man costume. I didn't tell him what to draw, he just drew it and I loved it. Kirby designed just about all--I mean, Thor and all of the things he did, he designed them. The one time he thought I was crazy, I said 'Jack I have an idea for a character called The Hulk. I want him to be a monster'....I didn't think he thought it was a good idea when I pitched it to him."