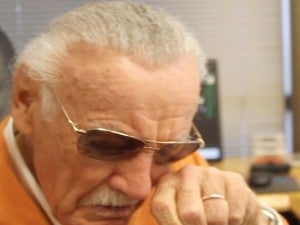 With all the comic cook characters that Stan Lee has been involved in creating, one might assume that he has several million Twitter followers. However, if one were to assume that they would be wrong, because the truth of the matter is that Stan "The Man" Lee doesn't even have a million Twitter followers. In order to rectify this horrible injustice, POW! Entertainment and Whosay have teamed up for a series of public service announcement to raise awareness about Stan Lee's Twitter situation. In the first of what looks to be a series of videos, Alison Haislip says, "You've seen it before...celebrities with a million Twitter followers and no real reason for it. What if I were to tell you that Stan Lee, the man who co-created Spider-Man, the X-Men, the Avengers, has half that many." The campaign appears to be working, because Stan Lee is now up to over 761,000 Twitter followers. But there's still more work to be done to get Stan Lee to a million. The Real Stan Lee on WhoSay