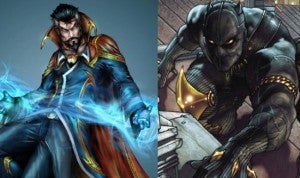 The big Marvel Studios news making the rounds today is that Stan Lee confirmed Black Panther and Doctor Strange as future Marvel Studios movies while appearing at the Wizard World New York Experience. Or did he?

When asked if Marvel Studios might be heading in the direction of a Marvel Civil War or World War Hulk movie, Stan Lee said, “I’m not involved in those decisions any more, but the people at Marvel are spending hours trying to think ‘What will we do next?’ And there’s a damn good chance that they will think of just what you mentioned because it would be a great idea, and little by little, everything you want to see will come along because they’re just like you. They’re fans of the stories, and they are trying to think, ‘What will the fans like to see next? What would we like to see next?’”

Because Stan Lee readily admits he's not involved in the Marvel movie decisions anymore, it's always difficult to say whether he is speaking on insider knowledge or just repeating what he has heard in the press. As far as the Doctor Strange movie, everyone has pretty much confirmed it will be part of Marvel Studios Phase Three. However, the Black Panther is a bigger question mark. But if Stan Lee is right, it could be one of the mystery 2016 or 2017 films from Marvel Studios.