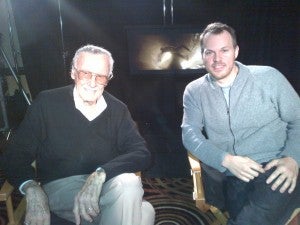 In a video interview made available earlier today at The Amazing Spider-Man Facebook page, veteran comics creator Stan Lee said that so many superheroes are orphans "because the writers are too lazy to come up with a background."

Of course, as the co-creator of many of Marvel's most popular, enduring and lucrative characters (and someone who's never drawn a published page, as far as we know), he's including himself in that statement, so don't get your panties in a twist just yet.

The question and answer came up in regards to Spider-Man's parents; the conversation was between Lee and Amazing Spider-Man director Marc Webb, who was promising more information on Peter Parker's relationship to his parents in the upcoming sequel.

"You mean the dead parents?" Lee joked, which touched off a brief round of speculation between the two regarding what had ever happened to the two after they vanished.

Lee also noted that before Marvel came along and started giving Iron Man and Spider-Man street addresses, it was pretty uncommon to see where superheroes lived. He said that he never knew where Clark Kent lived, be it in an apartment, a condo, a private house or some other "hideaway," and that curiousity over that kind of thing is what colored his decision to put his characters in very specific, identifiable locales.

Whenever he goes to England, Lee said, he looks for Baker Street and the other locales from the Sherlock Holmes stories--and he's proud that when people go to Forest Hills now, they're looking for Peter Parker's place.

Stan Lee: Superheroes Are Orphans Because the Writers Are Lazy