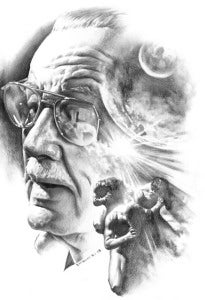 Stan Lee is taking a little bit of care of his fellow aging comics creators.

He's recorded a reading of his epic poem "God Woke," and it's available for sale now at iTunes, with a share of the proceeds going to the Hero Initiative.

"Sometimes you get a thought in your mind and it won’t let go," said Stan Lee. "I’ve had some notions about man’s relationship with God that kept spinning around my brain ’til I had to put them down on paper. That’s the reason for God Woke. Or, you might think of it as therapy for Stan."

The recording is available in two versions: Stan reciting the poem alone, or with Richard Wagner’s Rienzi Overture—one of Stan's favorite classical pieces—as background music! Both are available at 99¢, with proceeds benefiting Hero Initiative.

"Stan mentioned 'God Woke' to me one day, and I was amazed I had never heard if it," said Hero Initiative President Jim McLauchlin. "Stan grabbed a copy off his shelf. I read it, and immediately fell in love with it. We’ve been looking for a way to bring this to a large audience for a while now, and the recording in Stan’s own voice is the best possible vehicle to do just that. We hope that people will take advantage of the bargain price point, and fall in love with it themselves, all the while helping Hero Initiative."