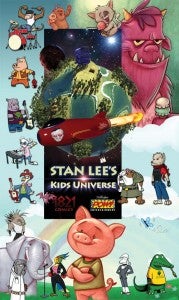 Stan Lee's Kids Universe Day is scheduled to feature the following activities: ● A book reading session for the kids with Stan Lee, where he will be giving out signed copies of books from the new imprint. ● Lunch and games with characters from the Stan Lee’s Kids Universe. ● Playtime with rescued animals. ● Arts and craft sessions for the kids.

1821 Comics co-founder Paris Kasidokostas Latsis said, “It’s an exciting time for 1821 Comics, after the successful launch of our first book with Stan Lee, Romeo & Juliet The War, which was an instant NY Times Best-Seller, we get to officially unveil our new label Stan Lee's Kids Universe. The brand at its core is a fun, creative and family friendly imprint that we are hoping will change the game. We are looking forward to Stan Lee's Kids Universe Day on February 2."

“The day has come to officially unveil Stan Lee's Kids Universe and we are excited to share the properties with kids and their parents during this special celebration,” added 1821 Comics co-founder and CEO Terry Dougas. “It’s truly an honor to continue working with POW! Entertainment and the legend himself Stan Lee---we can’t wait to share these new projects with the world in the coming weeks.”

“Stan Lee's Kids Universe was created to provide children with big imaginations an entirely new universe to explore, with the aim of telling stories that they haven’t read before yet provide educational value as well,” said Stan Lee. “It’s a thrill to be able to bring this new franchise and its colorful characters to life. I am excited to meet a new generation of brigadiers.”