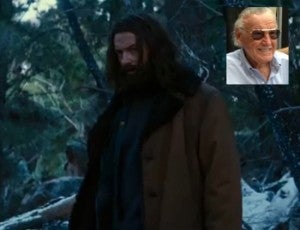 When Stan Lee appeared at Fandomfest this past weekend, Comicbook.com reported on his explanation for his lack of a cameo in The Wolverine. Stan Lee said, “I didn’t have a cameo in Wolverine. I apologize. I know you’ll be heartbroken, but they filmed it in Australia, and I just didn’t have time to go there, so I missed out on that one. The movie will probably be a dud [joking].”

While Stan Lee might not have appeared in the flesh in a cameo in The Wolverine, he did appear in spirit. And we really do mean in a spirit, because one of our readers pointed out that there was a special nod given to Stan Lee on a bottle of whiskey. In one of the snowy forest scenes, Hugh Jackman’s character Wolverine was shown with a bottle of Stanley’s whiskey, which is almost certainly a call-out to Marvel legend Stan Lee.

So while Stan Lee himself might not have even been aware of his cameo, it turns out that he did have a secret cameo of sorts.