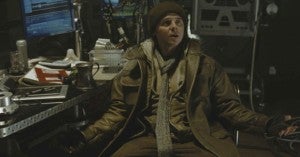 In an interview with London's Telegram newspaper, Star Trek and Shaun of the Dead star Simon Pegg dismissed long-standing Internet rumors that Benedict Cumberpatch, who plays the lead villain in the forthcoming Star Trek sequel, will be portraying fan-favorite Trek villain Khan when the U.S.S. Enterprise warps back into theaters next year.

“It’s not Khan,” Pegg told the paper unambiguously. “That’s a myth. Everyone’s saying it is, but it’s not.” He also said that the character is "not just another disgruntled alien. It’s a really interesting… sort of… thing. Obviously I can’t talk about it.”

Pegg claims that the rumors haven't originated from the set of the film or the production camp at all, and that instead it's a product of overly-ambitious Internet rumor sites angling for a scoop.

“It masquerades as interest in the movie but really it’s just nosiness and impatience," Pegg said. "You just want to say, ‘Oh f--- off! Wait for the film!’”

Black Lightning: "The Book of Resurrection: Chapter One" Photos Released

My Hero Academia Fans Are Obsessed with Lady Nagant's Debut