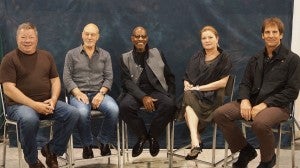 Well, Chris Pine couldn't make it--but he's in a whole other continuity anyway, so he really doesn't count. Still, today at the Wizard World Philadephia Comic Con at the Pennsylvania Convention center, all five captains from the five Star Trek television series camt together for the first time in the same building. Appearing at the convention this weekend, and pictured from left to right, were William Shatner (Star Trek), Patrick Stewart (Star Trek: The Next Generation), Avery Brooks (Star Trek: Deep Space Nine), Kate Mulgrew (Star Trek: Voyager) and Scott Bakula (Star Trek: Enterprise). The photo comes courtesy Tomlin Campbell, who took it for Wizard World. The stars were on-hand to sign autographs and meet with fans, and Wizard World had been actively promoting the panel that would bring them all together for the first time. Getting Patrick Stewart, who also had a memorable turn as Professor X in the first three X-Men features, was the final piece in the puzzle. "Bringing together the five Captains from the iconic Star Trek series, capped with the addition of the legendary Sir Patrick Stewart, is a once-in-a-lifetime opportunity for our fans," said John Macaluso, Wizard World CEO in a statement made before the convention began. Shatner was one of the event's headliners, along with wrestler CM Punk, Chris Hemsworth of The Avengers and others.

Riverdale Season 5 Is Now on Netflix

Xbox Fans Furious at Scalpers Over Mini Fridge Sell Out