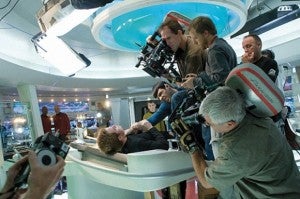 Mindel will reportedly shoot the movie on Kodak film stock 5219--a 35mm alternative to the digital photography used for the Star Wars prequels. Star Trek was also shot on film.

According to a story told at the event, Mindel is indirectly responsible for one of the defining characteristics of Abrams's visual style--albeit one he's promised to rein in for Star Wars.

Here's a snippet from the original report:

At today's event in the ASC Club House, the cinematographer discussed his first work with J.J. Abrams on "Mission: Impossibe 3." During a viewing of the dailies (a standard review of what was shot the day before, whether or not on 35mm film), a mistake lens flare caught the eye of the director. Dan showed him how they are created, which led to lens flares galore in "Super 8" and the recent "Star Trek" films, the latter of which Mindel lensed.