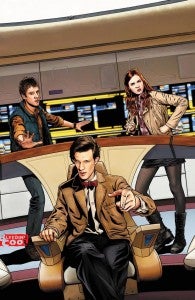 According to Bleeding Cool, the news and gossip site that first broke the news of DC Comics's upcoming Before Watchmen event, IDW Publishing will soon publish a comic book miniseries crossing over characters from their popular Doctor Who and Star Trek: The Next Generation licensed comics. A cover, seen at Bleeding Cool (who are very good at finding such things, having uncovered unsolicited DC covers in advance of the New 52 and images that appear to have been character turnarounds or toy workup sketches for Before Watchmen in the past) and reprinted here, was apparently acquired from someone at IDW for the as-yet-unannounced series that the site speculates will be officially teased at next week's Gallifrey One convention. Fans of the long-running BBC series will know that Doctor Who has never crossed over with other franchises before, although recently-departed star David Tennant told io9 in an interview that they had hoped to cross over with Star Trek during his time on the show. Star Trek has crossed over with various properties over the years, most recently with DC Comics's Legion of Super-Heroes in a still-in-progress miniseries by Chris Roberson and Phil Jiminez. "Landing the Tardis on board the Enterprise would have been magnificent," Producer Russell T. Davies told the Times of London in 2009. "Can you imagine what their script department would have wanted, and what I would have wanted? It would have been the biggest battle." Comic fans will apparently get to see a version of that scene, albeit perhaps with a different crew aboard the Enterprise (the article implies that the crossover would have been with Star Trek: Enterprise, which wrapped production during Tennant's tenure as The Doctor). No creative team was listed in Bleeding Cool's story, although a commenter on the site points out that Tony Lee, who presently doesn't have any projects going at IDW, will appear with the publisher at a London Super Comic Con panel at the end of the month, and that he has hinted at the possibility of an upcoming Doctor Who project in the past.

Star Trek, Doctor Who to Cross Over

She-Hulk: 10 Obscure Marvel Characters We Want to See in the Disney+ Series

Shawn Michaels Says Vince McMahon Didn't Have Time to run NXT, if Good or bad, 'That's on me'