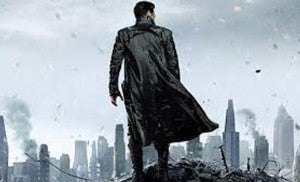 Ever since Lucasfilm confirmed that they had hired producer/director J.J. Abrams to tackle Star Wars Episode VII, everyone from fans to those closest to Abrams have wondered whether he would direct Star Trek 3 or not.

For their part, Paramount have said that they're holding the filimmaker to his contract, meaning that Abrams will at least return to produce the film, as well as another Mission: Impossible sequel...but the cast and crew of Star Trek Into Darkness certainly seem resigned to losing him as their director.

In the new issue of Entertainment Weekly, out today, both star Zachary Quinto and writer Roberto Orci suggest that it's a lost cause to get Abrams back aboard the Enterprise again:

"For J.J. this is achieving a childhood dream," Orci told the magazine. "Star Wars is what got him in the business. So watching him go to his Super Bowl like this? It's genuinely joyful for me. [But] as a guy who is in love with Star Trek and in love with this version of it? It puts a scared lump in my throat. It's like hearing one of the band members is going to do a solo album. I know Star Wars is going to be better for it, and I suspect Star Trek will be fine with the rest of us still here."

"I don't think anybody feels like he's going," added Quinto. "We feel like he's growing. J.J. surrounds himself with talented people, and if the day is coming where he has to hand off the director's chair to someone, then we will all embrace that person and trust that [the new director is] the next best choice. We're excited that is is being so bold and so declarative about what he wants to do and sees ways to bring his talent to a classic franchise -- like Star Trek four years ago -- that can use a fresh injection of new perspective. And we all benefit as moviegoers. And he'll be around. He'll still produce our movie even if he doesn't direct it. And maybe there's some version of this where [an upcoming Trek film] fits in [to the release calendar] in a way where he can come back around as director for us as well."

JoJo's Bizarre Adventure: Jojolion Reportedly Is Close To Its Finale