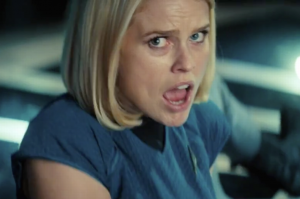 A reporter from Collider, attending a press event at Bad Robot in support of Star Trek Into Darkness tonight, tweeted that Alice Eve's anonymous female lead in the J.J. Abrams-directed sequel will in fact be Carol Marcus.

Marcus, in the original Star Trek continuity, was the mother of Captain James T. Kirk's son, David. Certainly there's nothing to say that she will or will not get that far with the Chris Pine version of the character in the newly-rebooted timeline.

That said, like the John Harrison "reveal" made earlier today, the revelation that Carol Marcus is a part of the story is being seen by many fans as confirmation that Benedict Cumberbatch's villain in the film will be Khan Noonien Singh. Both Harrison and Marcus played a part in Khan stories during the original continuity. Marcus was the lead on Project Genesis, which played a key role in the plot of both Star Trek II: The Wrath of Khan and Star Trek III: The Search for Spock.

It may also, for the more elaborately conspiracy-minded, raise the possibility of David Marcus as the villain, with time travel playing a role.

That her casting seems to hint toward Khan as the film's villain is a 180-degree difference from what many fans expected; most of the Internet chatter around Eve's character seemed pretty convinced that she would be playing Dr. Elizabeth Dehner, a character with ties to Gary Mitchell, another possible villain.

The tweet has since been removed, but you can still find it retweeted in a number of places, including here.