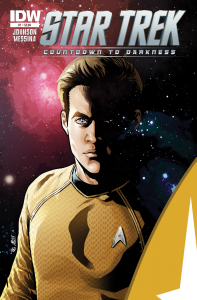 is the forthcoming sequel to J.J. Abrams's popular and controversial take on the Star Trek mythology.

(For the comic book savvy who don't necessarily get Star Trek, think of it as the Christopher Nolan version of Batman; not everyone is sold on it, and many of those who aren't, are extremely vocal--but that doesn't stop it making ungodly sums of money and being generally well-reviewed.)

In any event, in spite of the fact that it's the sequel to an existing movie, apparently enough time passes between the two movies that IDW Publishing will launch a miniseries set in the gap.

You can check out the cover at right, and the solicitation information below. The four-issue series will be written by Mike Johnson but overseen by Roberto Orci, a writer and producer on the film that worked on the previous miniseries for IDW.

(W) Mike Johnson (A/CA) David Messina The countdown to the motion picture event of 2013 begins here, in this blockbuster 4-issue prequel mini-series that sets the stage for the upcoming STAR TREK film! Like the best-selling STAR TREK: COUNTDOWN in 2009, this all-new series leads directly into the next movie, with a story by STAR TREK writer/producer Roberto Orci and Mike Johnson (STAR TREK ongoing series), and drawn by the original STAR TREK: COUNTDOWN artist, David Messina! STAR TREK 2013 PREQUEL is the can’t-miss lead-in to the new adventures of the Enterprise crew! $3.99

Star Trek Into Darkness To Get a Comic Book Prequel

Dr Disrespect Already Has a Big Problem With Battlefield 2042

Loki: Owen Wilson Reacts to Tom Hiddleston's Impression of Him