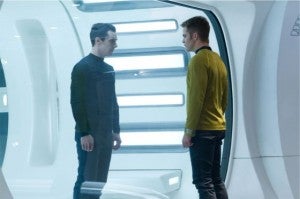 A little under an hour ago, TBS talk show host Conan O'Brien ran a Star Trek Into Darkness parody video during the Conan opening monologue. The joke hinged on the idea that some critics had reported the movie as being a little dry, full of too much technical jargon and inside baseball.

You can see for yourself how that message is conveyed onscreen, but there was something even more interesting AFTER the clip. When supposed credits from the film ran across the screen, the first name on the cast list is Benedict Cumberbatch's--and they don't list him as "John Harrison," but use another name familiar to Star Trek fans.

Whether this is actually any indication that the character in question will BE John Harrison is unclear, but if that turns out to be the twist, it's certainly a gutsy move for O'Brien, who has a good relationship with the people at Bad Robot and who debuted the first-ever footage from the film, to put that line of text on TV for all to see a week before the film's release.

It's also worth mentioning that they credit Leonard Nimoy as Spock Prime, indicating that they either took the credits from the first film (which is unlikely since Peter Weller is listed as Admiral Marcus), spoiled another surprise for Trek fans, or are just making things up for the purpose of animating a credits sequence.

Star Trek Into Darkness: Was the John Harrison Twist Just Spoiled on Conan?