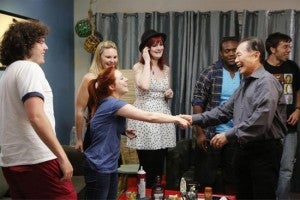 Syfy has just announced that George Takei will appear on the series premiere of Syfy's Fangasm on Tuesday, September 24 at 10:00 PM. In the premiere episode, Star Trek's George Takei makes a surprise visit that becomes a life-changing moment for the gang.  In an unexpected and emotional moment, Mr. Takei shares laughs and insight on what it means to be a fan of the movies, TV shows and stories that inspire us. One roommate in particular is sincerely moved as he recounts how Star Trek shaped his childhood and brought his family closer together. Syfy's Fangasm follows seven fanboys and fangirls – Andrew Duvall, Sal Fringo, Kristin Hackett, Molly McIsaac, Paul Perkins, Mike Reed and Dani Snow.  The gang lives and breathes all things science fiction, comic books, collectibles, cosplay, life-action role playing games and pop culture. The tight-knit group of big bangers spend the summer living together in Los Angeles and interning at Stan Lee's Comikaze Expo – the dream job of their lifetimes. Fangasm is produced by the creators of Jersey Shore, 495 Productions, with Executive Producers SallyAnn Salsano, Joel Zimmer and Charlie Newton.