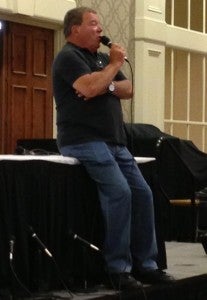 At an appearance at Fandomfest in Louisville, Kentucky, William Shatner announced that he is planning a cross country motorcycle ride. Shatner is teaming up with Kentucky artist Douwe Blumberg and American Wrench of Chicago, Illinois to create three custom motorcycles. “One I’ll take, and I’ll drive it from Chicago to LA. And these other two will be for sale,” said William Shatner. “What a thrill to drive a motorcycle cross country.”

Shatner also relayed a story about driving cross country in a car two years ago. While talking about going through the Allegheny Mountains, Shatner said, “I opened the car up to 155 miles per hour, so I’m going along the empty highway, nobody’s around, and I realize 155 is a felony. And I thought, ‘Hmmm…no one will come to Comic-Con if I’m arrested for a felony, so I better slow down.”