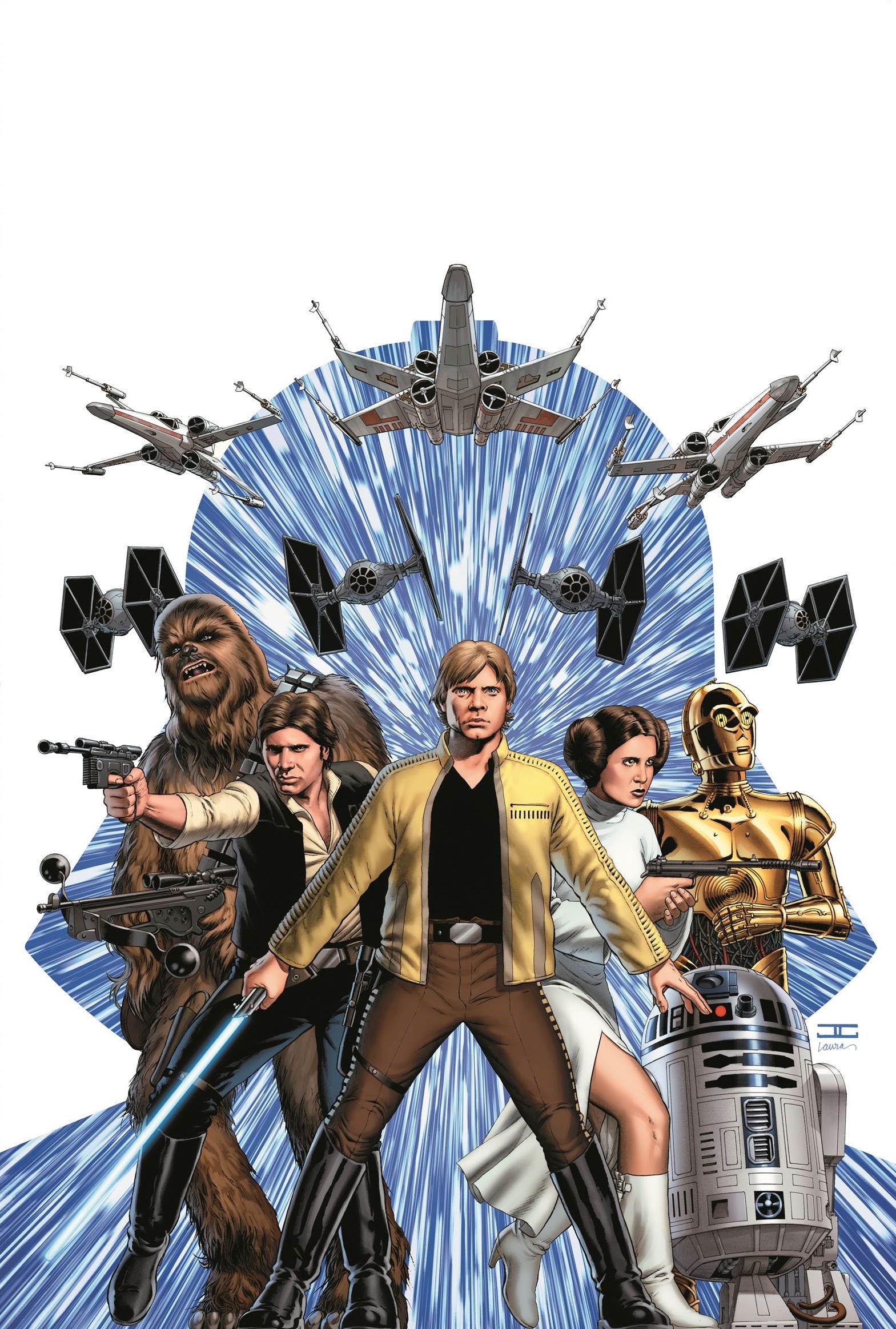 Whether you're a die hard fan, a cinephile, or someone who just enjoys movies, you probably have some sort of relationship with Star Wars. The cultural impact of George Lucas' initial 1977 science-fiction epic alone is immeasurable, a touchstone that we all know and (almost) all enjoy. It is still a defining film for someone like myself who spends much of his personal and professional life engaging with stories in multiple mediums. That impact is integral to evaluating Star Wars #1 from Marvel Comics. It is not just a Marvel new series or another Star Wars story. It is a new starting point for the multi-media empire founded on this classic film and the first comic to sell more than one million issues in many, many years. The legacy of Star Wars and significance of this launch have set expectations for Star Wars #1 excessively high.

Star Wars #1 meets those expectations on the very first page, then proceeds to exceed them.

The first several pages of Star Wars #1 don't even contain the comic itself, beginning with the Star Wars logo laid across a black two page spread, which then leads into an introduction designed to appear like the classic scrolling exposition that opens each film. These choices may not have even been made by the creative team, but they set the tone for the series in a way that seems incredibly obvious only in retrospect. Those eight massive yellow letters on the opening spread connects the comics medium to the moviegoing experience. You can almost hear the blast of trumpets in John Williams' score when opening to the front page.

That big screen sensibility is maintained throughout the issue in a comic that reads like Star Wars is watched. Very few comics adaptations manage to succeed in capturing the look and feel of their source material. In the attempt they often feel forced and lifeless, like cardboard cutouts to be placed alongside the real thing. Star Wars #1 is the thing itself; it reads like a comic cut from the same cloth as the first film. That achievement is not overly surprising when you consider the creative team behind Star Wars. Jason Aaron, John Cassaday, and Laura Martin are a trifecta representing some of the best creators in the fields of writing, art, and coloring. Marvel Comics took no risks in assembling a team for this series and their efforts are rewarded here.

Aaron is best known for writing brutal superhero and crime stories like Thor: God of Thunder and Scalped, but he reveals his adaptability in Star Wars #1. None of the ugliness that permeates much of his work is to be found here. It is entirely replaced by notes of high adventure, fun, and soap operatics. That unique blend of elements is so well structured that it does not seem entirely farfetched to imagine Aaron traveling back in time to meet with a 33 year old George Lucas.

The chameleon-like scripting doesn't undermine Aaron's skill as a storyteller though. He invents a narrative that feels like it could have easily been found on the big screen in the freshly rebooted territory between Star Wars and The Empire Strikes Back. The stakes are significant in the Rebel's newest plan to dismantle the Empire. This doesn't read like some insignificant cliff note, but an important step in the war between Yavin and Hoth. The opening pages provide a tense setting, and Aaron paces the story so quickly that characters tossed from the frying pan into the fire, and then into the molten rivers of Mustafar. Even more impressive is the inclusion of patented Star Wars humor and banter alongside all of the action, including a very enjoyable reference to another famous science-fiction film franchise.

Aaron doesn't waste time with cute introductions for any of his cast. Han, Luke, Leia, Chewie, R2-D2, and C-3PO are all pulled into the action quickly. They're a team revealed within the heat of the moment. Although it would be a safe assumption that readers are familiar with the entire team, Aaron does not take this popular understand for granted. He crafts an introduction that provides everyone an opportunity to reveal themselves. Whether it's Luke pursuing a noble, but foolhardy motive or Han tossing out one-liners alongside blaster bolts, each person (or wookie (or droid)) reads naturally like themselves. Aaron ensures each member of the central cast (Luke, Leia, and Han) has a big moment (and accompanying splash panel) in which to perfectly capture their personality.

It's Cassaday who makes these panels work as well as they do. Not only does each function within the flow of the story, but they stand alone as works of art which could be mounted to the wall above a teen's bed. There is a simultaneous recognition of the story which brings these characters to life and their iconic nature.

Cassaday is a consummate storyteller throughout though. His compositions always strive to propel readers forward, enhancing the story beats within each panel whether they are humorous, shocking, action-oriented, or something else altogether. He clearly grasps the significance of this issue and the intellectual property, but that never threatens to overwhelm the comic. While Star Wars is one of the most important films in American cinema, it is at its heart a very fun, adventure story. This is the tone found in Cassaday's work. It is vibrant, moving too quickly to second guess itself. As a result, Star Wars #1 reads like the joyous rebirth it ought to be.

His style is the perfect mix of realism and modern superhero comics. Humans, aliens, and droids all appear like they do in the film and remain lifelike. Han Solo is clearly still a young Harrison Ford, but Cassaday does not shackle himself to perfectly mimicking the actor's face. He captures Ford and the other actors essences, but allows them to breathe within each panel. Cassaday also seamlessly incorporates his own designs with those inspired directly by the films. New droids, buildings, and fashion all appear as if they would be perfectly at home on a 20th Century Fox set. Star Wars #1  is not Cassaday's most inspired work to date (the title for that still belongs to Planetary or Astonishing X-Men), but his pencils and inks remain a highlight amongst mainstream comics artists.

Martin brings these pages to life and plays with some of the more interesting elements within Cassaday's work. Of particular interest is the design and appearance of lightsabers within these pages. Martin makes the elegant weapon humm and shimmer when it appears, as it flickers across panels in wide, sweeping arcs. These bright elements appear all the more lush against the rough, dirtied backdrop of an industrial planet filled with factories and garbage dumps.

Star Wars #1 is the perfect Star Wars comic. It captures the tone and feel of the films, while beginning a story that fits seamlessly into the beloved universe. If there were any doubts regarding Marvel's stewardship of the Star Wars comics brand, this one issue ought to instantly remove them. Every page of Star Wars #1 is a delight to read. Aaron, Cassaday, and Martin have flawlessly transferred the classic film to the comics medium, and with it the tremendous delight of experiencing Star Wars for the very first time.