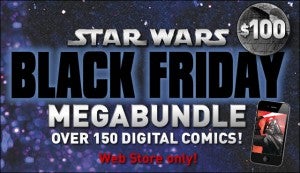 The long-term future of the Star Wars comic book franchise may be in doubt, but with a new ongoing monthly set during the original trilogy coming soon from Dark Horse, the publisher is taking the biggest shopping weekend of the year to promote its extensive back catalog of Skywalker and friends. Dark Horse Comics will hold a digital-only Black Friday sale on Star Wars licensed comics, selling over 150 issues of a number of different Star Wars miniseries for $100 as a digital bundle. Next weekend, from Friday until Sunday, fans can get nearly 4,000 pages of Dark Horse's critically-acclaimed comics, including  The Clone Wars, The Old Republic, Crimson Empire, Lost Tribe of the Sith, Agent of the Empire and series starring Darth Maul, Darth Vader and Boba Fett. "Go back in time to the origins of the Jedi in Dawn of the Jedi, to one hundred years after the films end with Legacy, and more," teases Dark Horse.