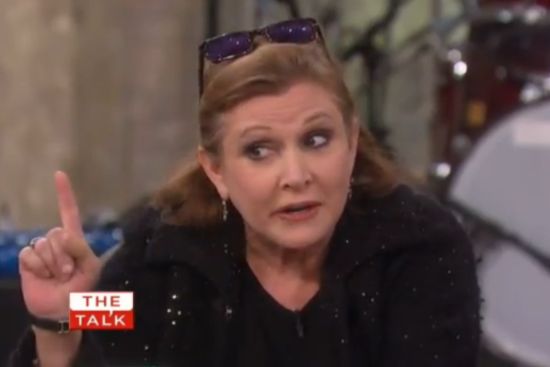 It’s been reported that Harrison Ford is interested in returning for Star Wars Episode VII. It’s also been speculated that if he returns he might stipulate in his contract that Han Solo be killed off, marking the final appearance of the character. In the past, Harrison Ford has stated that he thought Han Solo should have died in Return of the Jedi, but George Lucas wouldn’t allow it.

Now, with Disney having announced that Star Wars Episode VII is in the works, Harrison Ford might finally get his death wish, and it looks like one of his co-stars is interested in doing the deed. In an appearance on The Talk on Tuesday, Carrie Fisher was asked about Princess Leia returning in Star Wars sequels.

Fisher said, “I like the idea of being Mrs. Solo, when we’ve just fought and fought, and I killed him.” However, Fisher also expressed that Princess Leia would feel remorseful  for putting an end to Han Solo. Fisher added, “But I’m sorry. I’m sorry, that’s right. I feel badly, and I probably had an affair with some general.”

With all the rumored Star Wars plot lines, Carrie Fisher seems to be proposing one of the most interesting ones yet. Harrison Ford wants Han Solo to die, so why not let Princess Leia kill him. Audiences would never see that one coming. Han Solo put down by a remorseful, cheating spouse.