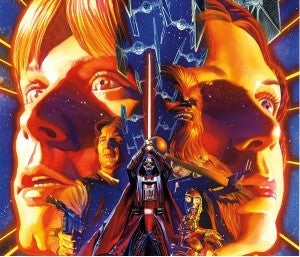 A new report coming out of a Disney fan blog suggests that Star Wars comics will come to Marvel Comics in 2015, positioning the Disney-owned publisher to take control of the property for the first time in more than 20 years--just in time for Star Wars Episode VII to hit theaters. Says Blue Sky Disney, " One of the things that many people wondered after Disney bought Lucasfilm was how long will this relationship continue? Especially since the Mouse owns Marvel, the largest comics publisher in the world. Well, it appears we now have the answer. The Suits in the know have determined that no new contracts will be given to Dark Horse after the current ones expire. So all new projects after 2013 will be handled internally by Marvel." The blog adds, "It's not known yet if titles will be worked into the regular line up, or will Marvel create a special branch of the company that deals with Star Wars. It'll take a couple of years for the old deals to work there course, but the stories that Dark Horse have coming down the pipeline will be the last. And you can expect anything new from Marvel dealing with Star Wars to arrive around 2015." Among those projects currently in the pipeline are the first-ever Dark Horse series set during the original trilogy, Brian Wood's Star Wars. The publisher also recently launched Star Wars: Legacy by Corinna Bechko and Gabriel Hardman. While it's been widely assumed that this would happen, in the same way that Disney reverted the rights to publish The Muppets, Toy Story and other licensed Disney comic books from Boom! Studios to Marvel Comics at the end of their licensing contracts with Boom!, many had hoped the studio would hold off on changing the formula in the case of Star Wars, which have been published through Dark Horse Comics since 1991, during which time they've built a substantial fan following. Dark Horse did not immediately respond to ComicBook.com's request to comment on this most recent report; shortly after it was announced in October that Disney had bought Marvel, the publisher responded that it didn't change their short-term plans. "Dark Horse and LucasFilm have a strong partnership which spans over twenty years, and has produced multiple characters and story lines which are now part of the Star Wars lore," said Mike Richardson, President of Dark Horse Comics. "Star Wars will be with us for the near future. Obviously, this deal changes the landscape, so we'll all have to see what it means for the future."