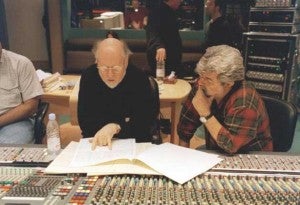 Previous comments made by composer John Williams and director J.J. Abrams had suggested that Williams will return to the Star Wars franchise for Episode VII through IX, but at Star Wars Celebration Europe, they've just made it official.

The news came from Lucasfilm's Kathleen Kennedy and then spread like wildfire via social media. It was quickly confirmed by the official Star Wars Twitter account.

"I've loved doing the Star Wars films with all the fanfares and the flourish. The galaxy far, far away - I feel like I'm still in it; I feel like I've never left it, having worked on all of the six films. I'm just happy to be continuing to be part of the whole fun of doing it," Williams said in a YouTube interview embedded below.

He added that While he hasn't yet seen the script, he imagines there will be opportunity to revisit old themes in the film--something that he's enjoyed returning over and over again for sequels.

John Williams has been nominated for 48 Academy Awards, and has won five as well as seven BAFTA Awards. He has scored the Star Wars, Indiana Jones, Harry Potter and Superman franchises, among many others.