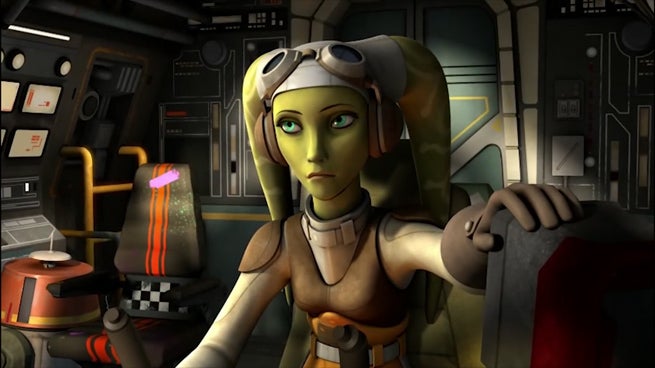 In honor of Star Wars Day, we're spending all day with some of our favorite castmembers of Star Wars Rebels. We discuss Season One, tease a bit more about Season Two, and discover the next twists and turns on the way.

Hera plays the role of Rebels' pilot, but that's just the tip of the iceberg for the Twi'lek member of the crew. Her voice actress, Vanessa Marshall, brands her the "Mother" of the group--a role she finds herself playing as well when working with the rest of the cast. If someone is hungry or thirsty in the recording booth, Marshall always has a snack on-hand for them. And if an actor isn't quite breaking a scene, she's the one that puts in some extra time with them (outside of the directorial staff of course).

When we spoke with Marshall at the Rebels Season Two red carpet, we talked about these relationships, and what's to come for the nascent alliance of rebels. Being the biggest Star Wars fan on the show, we had to talk about the other events of Celebration Anaheim first, though.

Vanessa, it's been a heck of weekend, with some pretty shiny new trailers!

VM: Oh my goodness. Episode VII just murdered me. I'm so grateful I was alone watching that. Right?

VM: (laughs) Yeah, I was so grateful to be alone on the one hand. But then I think my neighbors think someone was murdered in my home. The thing is, they weren't tears you would cry at a funeral in the sense of being violent and morose. It was that level of joy, but the volume was the same. So…

We have talked a lot about Hera…

So let's talk about everyone else instead.

Now that the mission has expanded, what does Hera want for everyone else? Is she really guiding them, or just trying to serve her own mission?

VM: I think, actually, she can breathe a huge sigh of relief in Season Two, to the extent that she no longer has to choose which pieces of information to dole out and when, because Fulcrum, who was giving her that information, is now standing right next to her! So she can just sort of silently stand there. She worked really hard to amass this group for a very particular reason; they've all demonstrated that they're capable, and they're worthy of the task at hand. I think she can sit back and trust that they will now execute that in the way that she believes they can as a group.

Unfortunately for all of them, Darth Vader's nearby, so why she may be breathing a sigh of relief, she should shortly thereafter be inhaling and freaking out, because she might die. Evil has entered the building, and it's going to get really ugly.

Obviously you had a ton of interaction with Kanan and a decent amount with Sabine in Season One. New or returning, who are you looking forward to interacting with in Season Two?

VM: Ahsoka! I love Ahsoka. I love her.

VM: Oh yeah! I think so. I know she disobeyed Fulcrum, and I'm astonished that got brushed under the carpet. She never got taken to task. At the end of the day, I guess, because the mission was successful, it all worked out. But she did disobey orders, which is something Hera doesn't do! I think she'll be making up for that a bit, and doing as she's told for the remainder of the mission.

The action really ramped up at the end of the first season, and it looks to be going full steam ahead into Season Two. How does that affect the way you play the character, and how you incorporate your own moments and emotion into her?

VM: I think as we learn more about each character's history, it gets really deep. Some of the acting I've witnessed is really profound; these people are so talented, and they're so vulnerable and authentic in front of the microphone that when they bring that performance to the room, they give us permission to be as sincere and vulnerable as that. There are really intense things that happen, and reveals in regard to everyone's past in Season Two. I think it gets so real so fast that it's hard not to get caught up in that!

We've had an exciting and emotional weekend here as Star Wars fans. Now that you're a part of the family and convention, what does it mean for you?

VM: I don't think words can describe it. They asked me on a scale of 1-10, what kind of Star Wars fan were you before this job, and now? I think I was born a 10, and now it's intergalactic, I have no idea! Or at least I remained a 10 but a stronger 10?

It's been a very private thing for me in the past. I loved Star Wars; I'd play with my action figures by myself. It's a lonely operation, or it can be, until you get on twitter. Suddenly, I have so many friends that I adore! Coming to an event like this and seeing them is a really emotional experience. I can't explain how much I love these people. You guys get it! I've spent so long by myself feeling this way that finding a group of people who get it is like coming out of hiding. I feel like I've found my people, and it's Heaven on Earth.